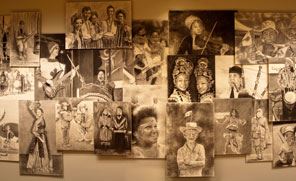 Charcoal pencil on medite board

"Coquitlam Synthesis" (PDF) was commissioned by the City of Coquitlam in partnership with Pinetree Secondary in School District Number 43, to engage youth and to support creativity and innovation in public space. Unveiled on February 17, 2011, the project was funded through a Multicultural Grant from the Federal Government.

The images in this piece were taken from a variety of Coquitlam’s cultural festivals and events during Coquitlam’s "Cultural Capitals of Canada" year in 2009. Eleven high school students worked under the tutelage of Pinetree Secondary School art teacher Brian Gleckman to create 31 panels that complete a 14-foot mural. Each panel is hung a varying distance from the wall, creating a striking, three-dimensional effect.

Work began on the piece in September of 2010, with completion in January 2011.