Rising Water: The Great Flood of 1948

A heavy snow pack, a cool spring, record warm temperatures and plenty of rain. The stage was set for one of the most impactful natural disasters ever to hit the region: The Great Flood of 1948.

Hundreds of photographs of the 1948 flood survive in archives across the Lower Mainland, preserving a visual record of the devastation. The Fraser Valley was hit hardest, but Coquitlam was not spared from the rising waters.

This online exhibit discusses the impacts of the flood on the region and showcases photographs of the flood from Fraser Mills and Colony Farm that are preserved at the City of Coquitlam Archives. The exhibit also highlights the community spirit that arose, as documented in the first-hand accounts of those frightening weeks in May and June of 1948. 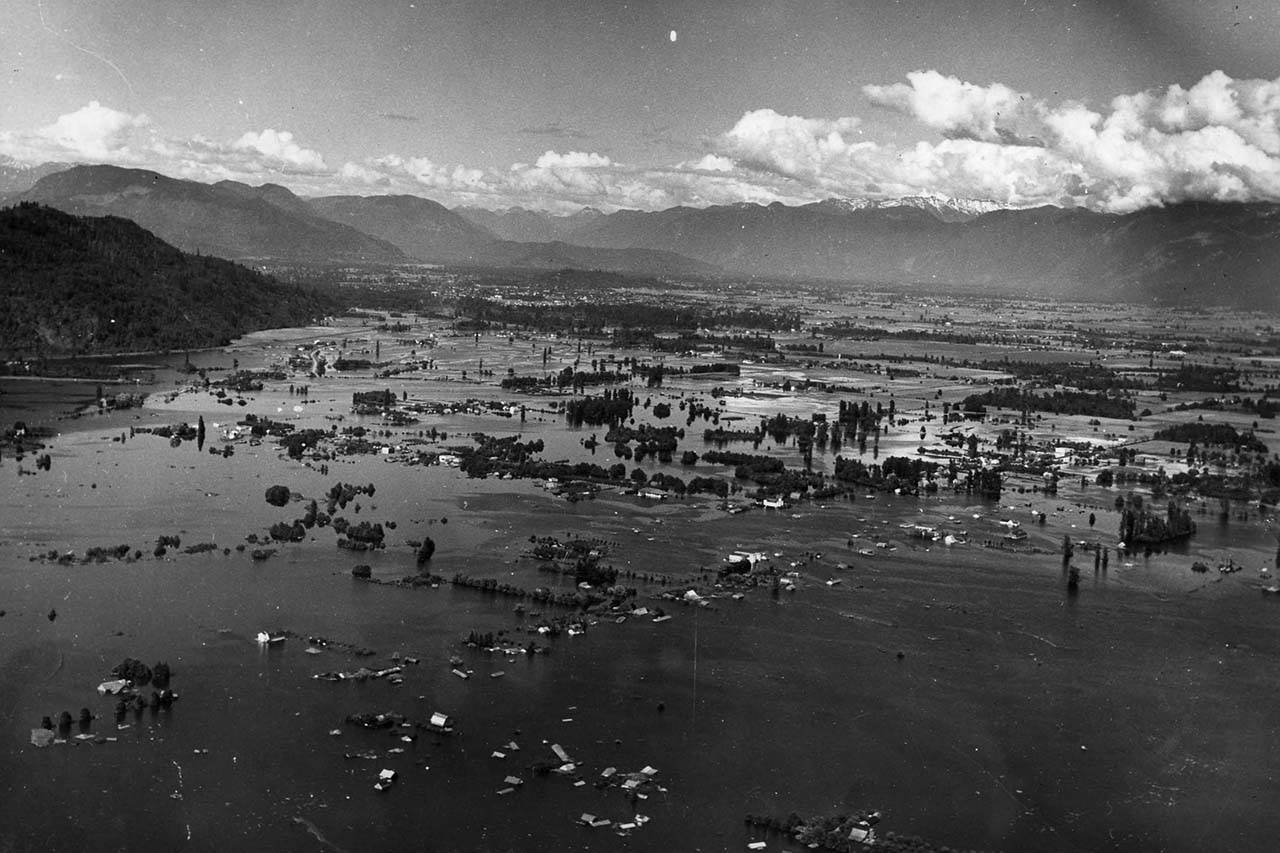 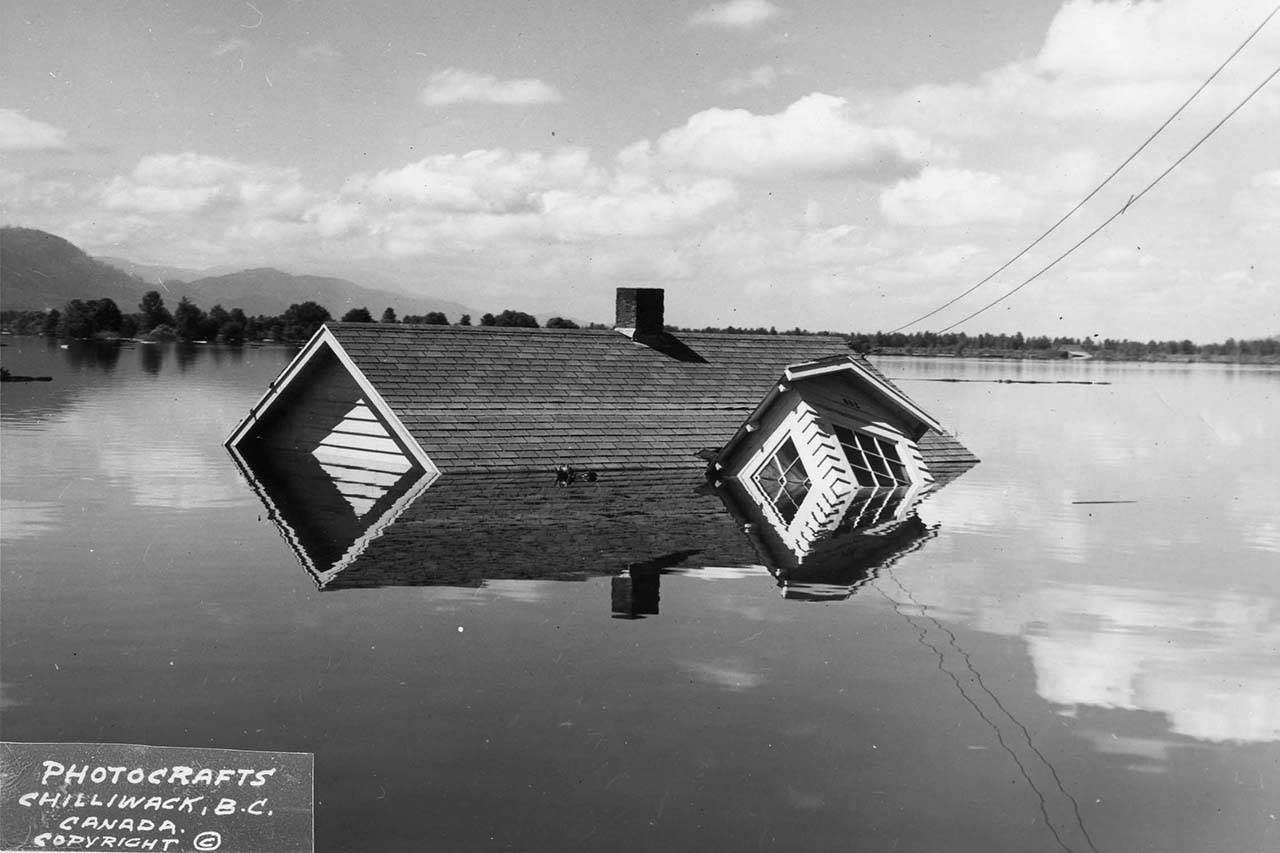 House under water in Chilliwack
(Source: Chilliwack Museum and Archives)

On May 26, C.E. Webb, District Engineer with the Dominion Water and Power Bureau was quoted in the Vancouver Sun: “Serious flood threats will grip the entire Fraser Valley unless there is a sharp temperature drop in south-bound central B.C. within the next ten days.” Unfortunately, the temperature did not change and Webb’s predictions came true.

Author, K.J. Watt has written a tremendously detailed account of the events and impacts of the 1948 flood in her book entitled, “High Water: Living with the Fraser Floods.” Watt provides a day-by-day account that traces how the flood unfolded and how each area across the region was affected.

In late May, residents of the Fraser Valley began to worry about the state of their vast diking systems as low-lying land was underwater. The dikes in Agassiz broke on May 26 and on May 28, the main dike on Nicomen Island burst “like an atom bomb.”

On May 30, the Queensborough dike in New Westminster was handed over to the Army, but not before more than 70,000 sandbags were put in place. On May 31, Matsqui declared a state of emergency and parts of Fraser Mills and Colony Farm were flooded.

On June 3, the Hatzic dike broke and Lougheed Highway “looked like a stone jetty thrusting its head into the sea.” The west dike at Colony Farm broke on June 8, only a few days before the waters peaked on June 10.

On June 25, the flood was declared a national disaster by the federal government. Finally, by June 26, the Fraser had “receded to the 20-foot mark, considered to be the edge of the danger zone.”

Click here to view footage from the CBC Archives of the Fraser Valley at the height of the crisis. 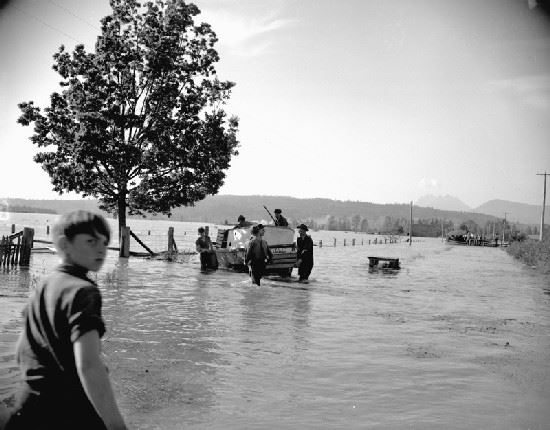 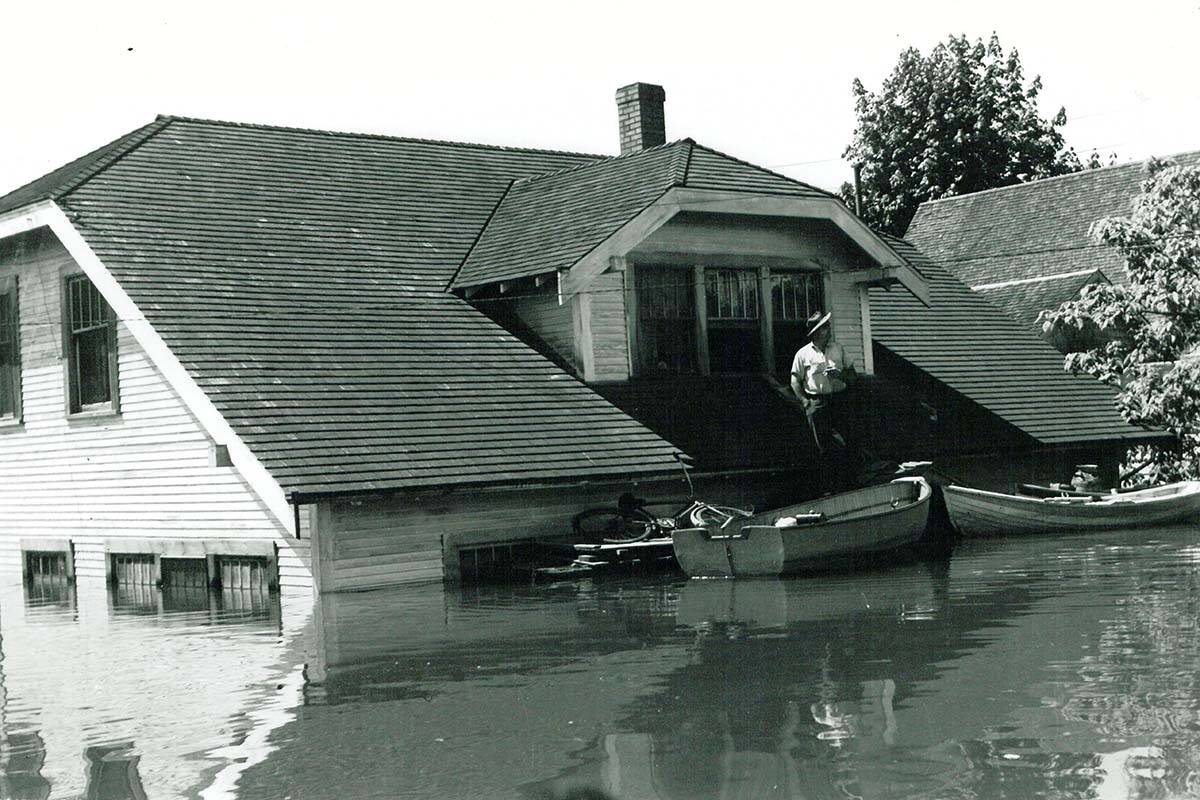 In the end, “an estimated 16,000 people were evacuated from a lower Fraser Valley population of 50,000. The human and logistical problems the 1948 freshet created – and the emergency response required – were focused not in a single place, but rather scattered along more than a hundred miles from the tidal reach of the Pacific Ocean to beyond Ruby Creek, downriver from Hope.” (Source: Watt, 2006)

The waters receded but they left devastation in their wake. According to K.J. Watt,

“going home for many people was a time of heartbreak and hard work. Gardens were ruined. Barns were inundated. Hay was sodden. Walls, doors, and floors were warped. Outhouses were overturned and their contents mixed with the water all around. Jars of home canned fruit and vegetables floated in cellars filled with water. Sludge—sometimes many inches deep—muddied floors and sat in corners. Silt fastened itself to walls and windows and lay sometimes many feet deep on farmland. The smell of decay was everywhere.” 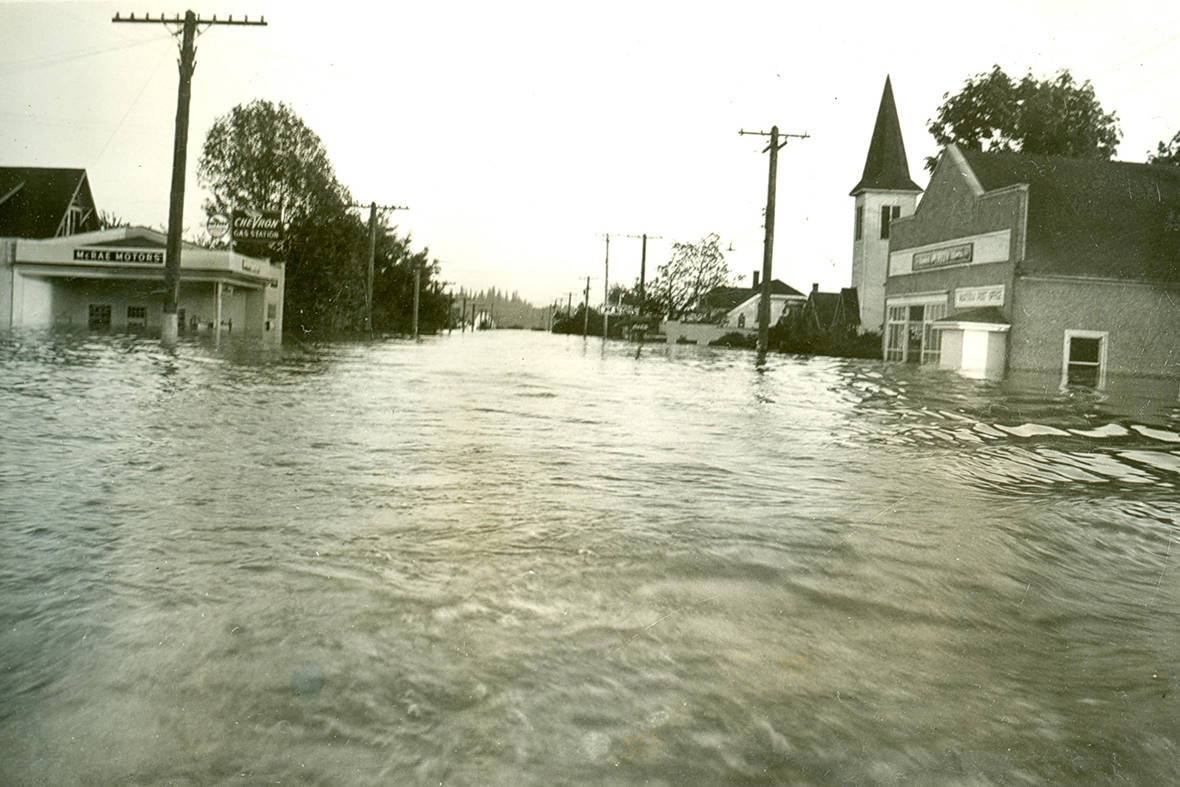 Matsqui under eight feet of water
(Source: The Reach, P1634) 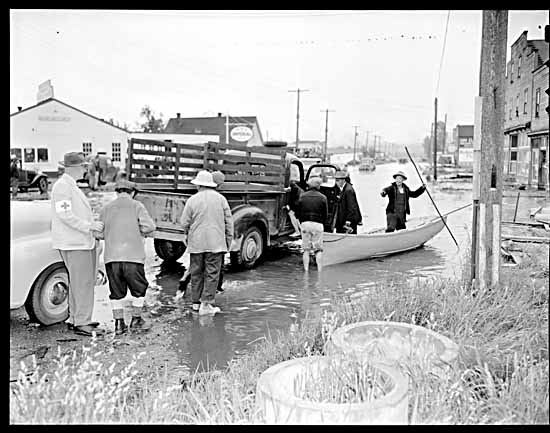 Personal Accounts of the Great Flood

Coquitlam was spared the worst of the effects from the 1948 flood, but Fraser Mills and Colony Farm experienced high waters that damaged buildings and fields and caused chaos for several weeks. Coquitlam residents noted how the community came together to support each other. This is a common thread in how the 1948 flood is remembered across the region.

The following quotes are taken from Coquitlam 100 Years: Reflections of the Past

“Fraser Mills had all wood sidewalks, and when the flood came, well, they raised up and floated. The big flood was in '48. Everything in the house was floating, and the mill was shut down for a long time. I went down to Lulu Island to sandbag as a volunteer.” 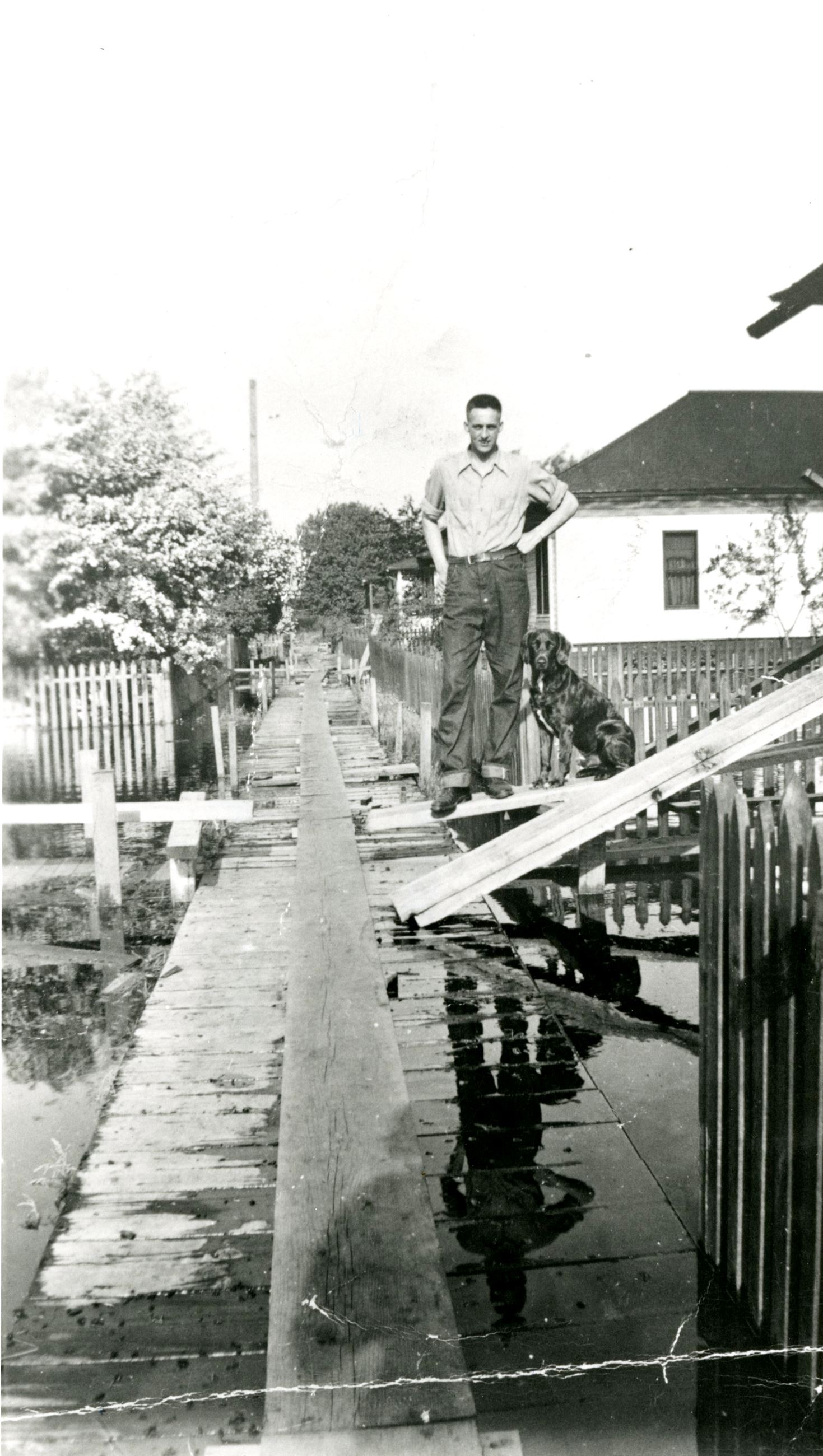 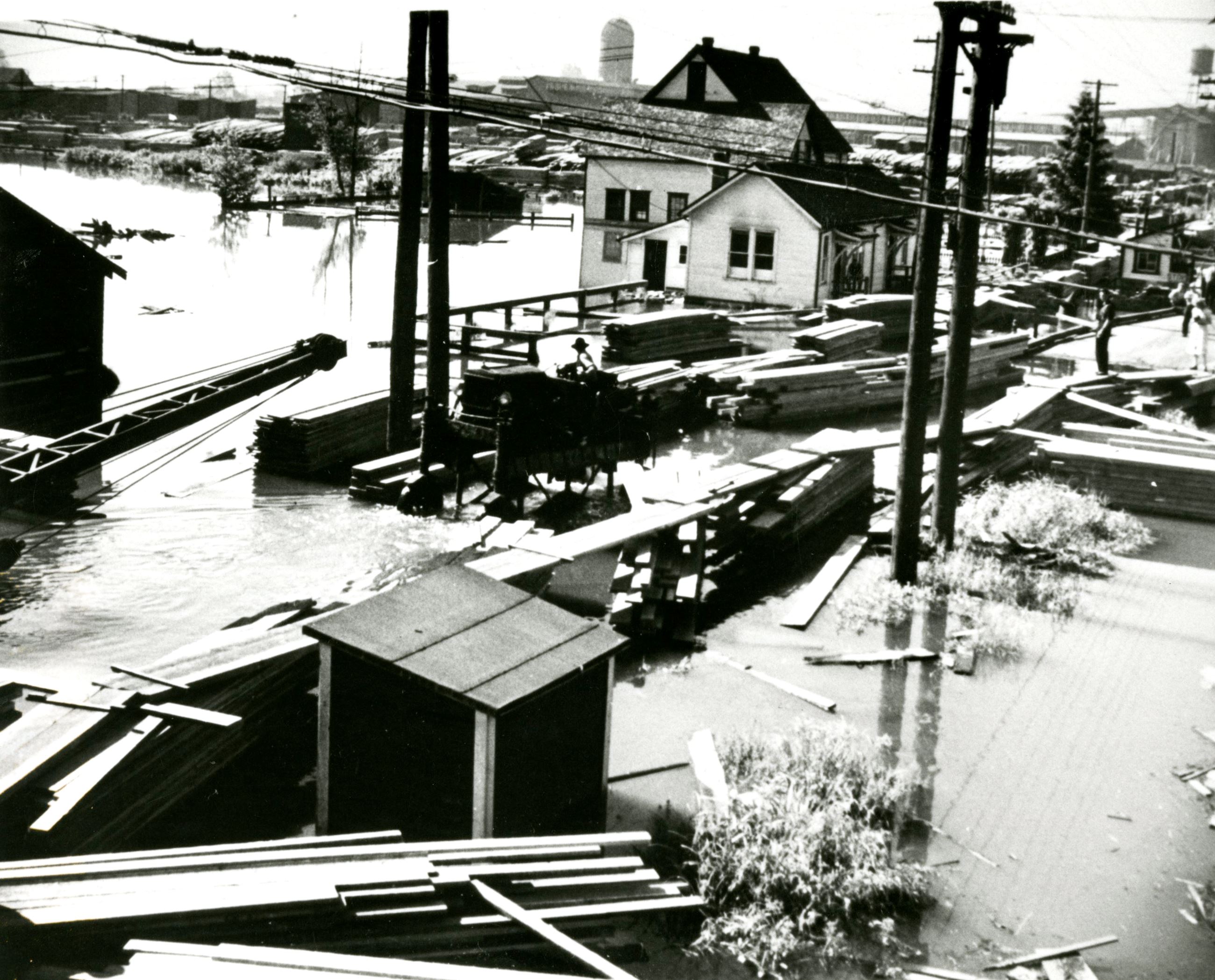 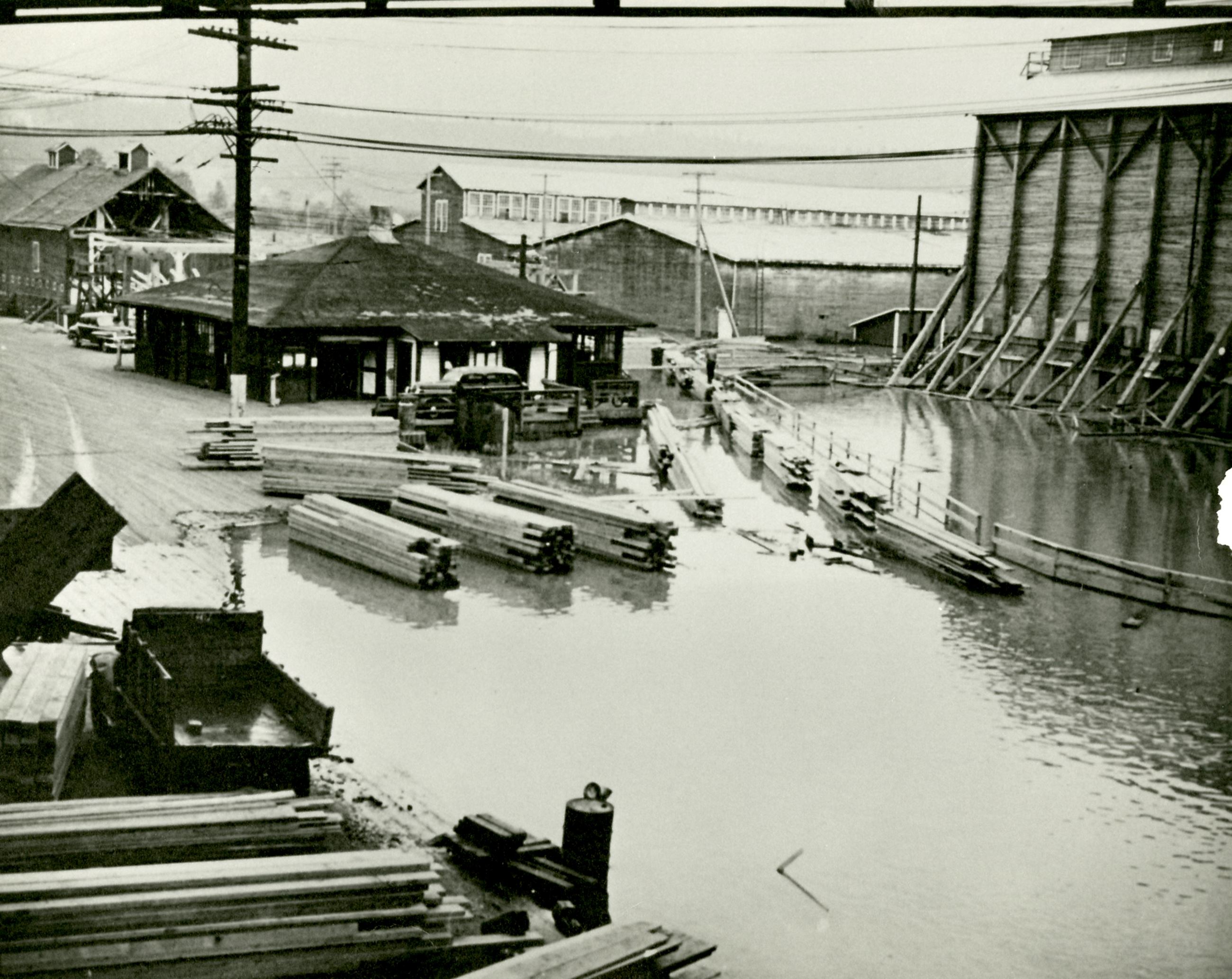 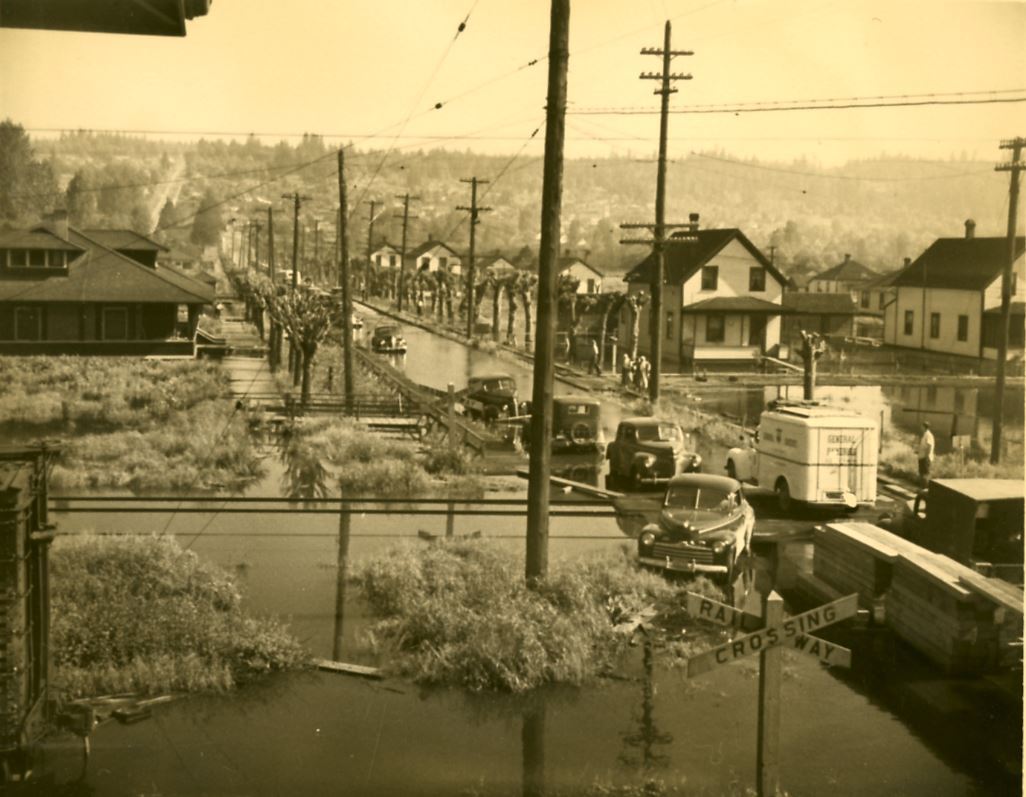 “I remember the big flood of 1948 - Fraser Mills flooded over, and the mill was shut down for a while, a month or more, something like that. That was the only really bad flood - all the houses at Fraser Mills were also flooded out.” 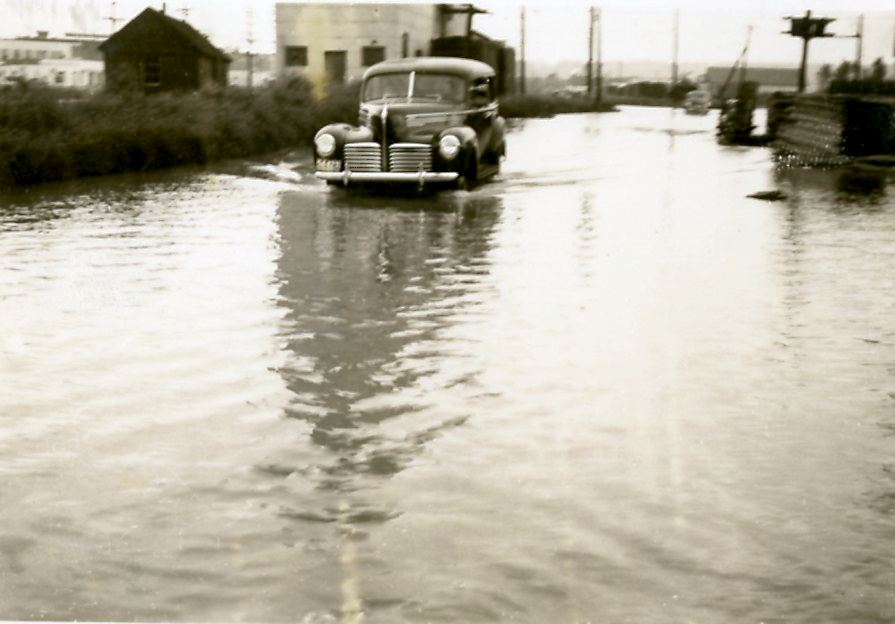 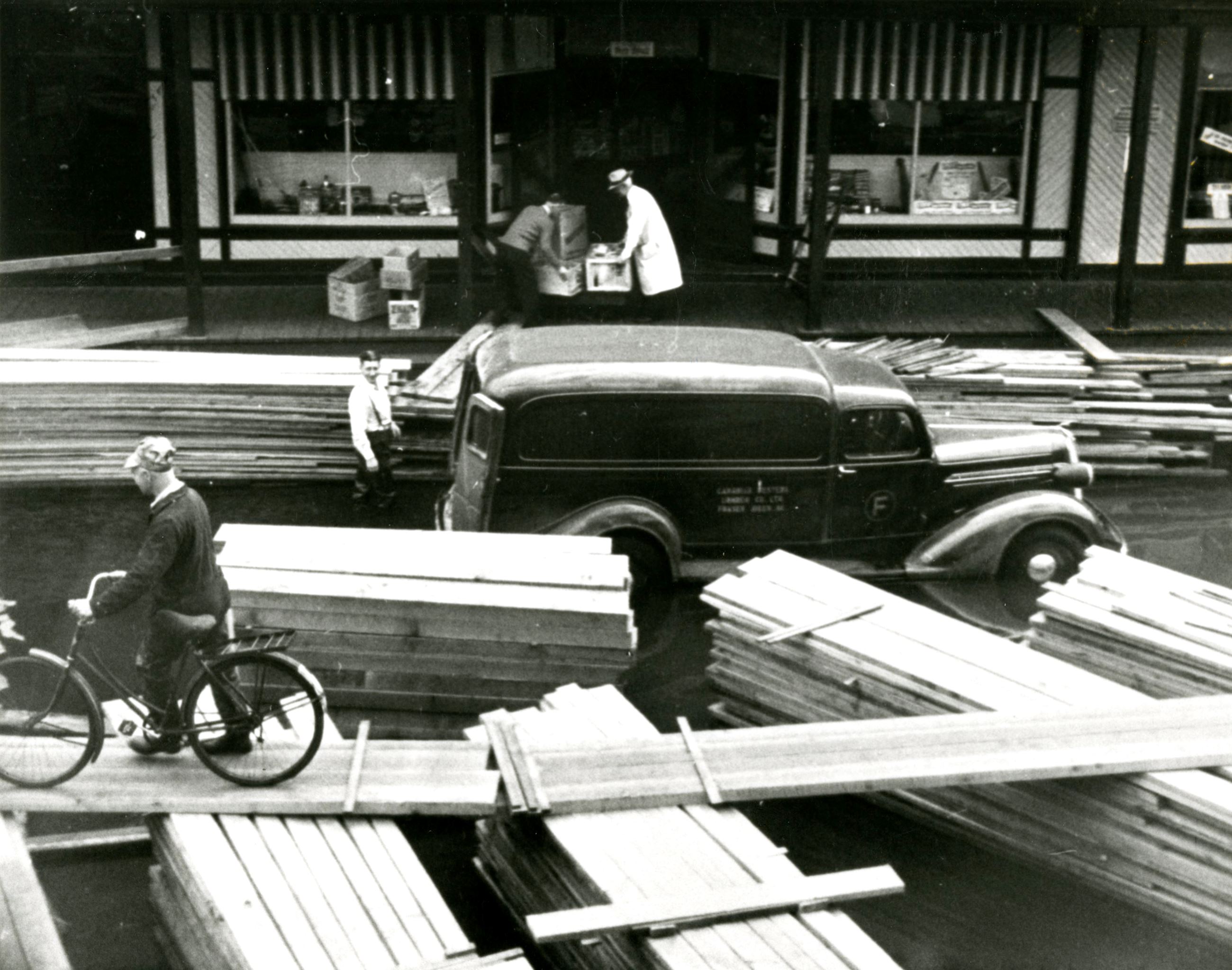 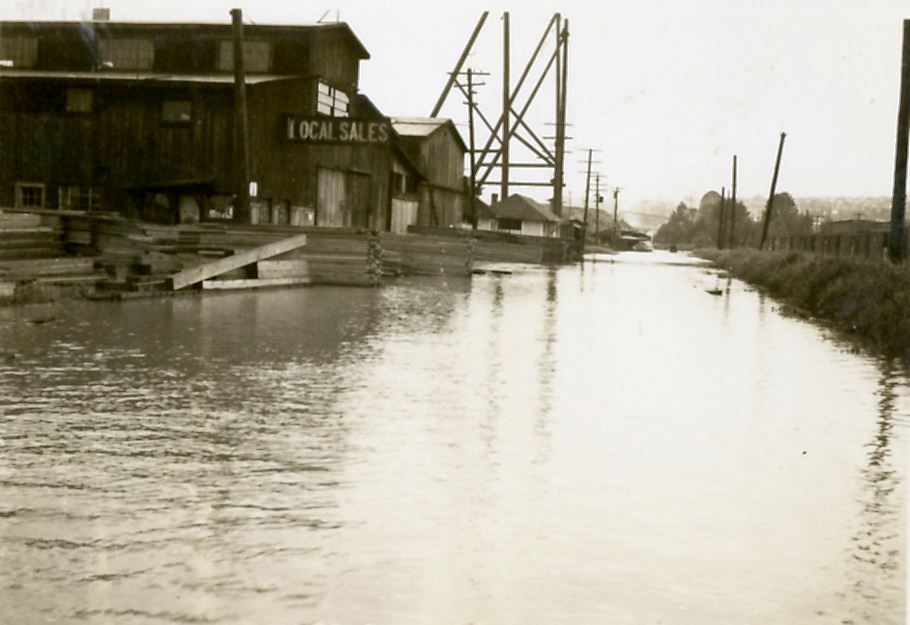 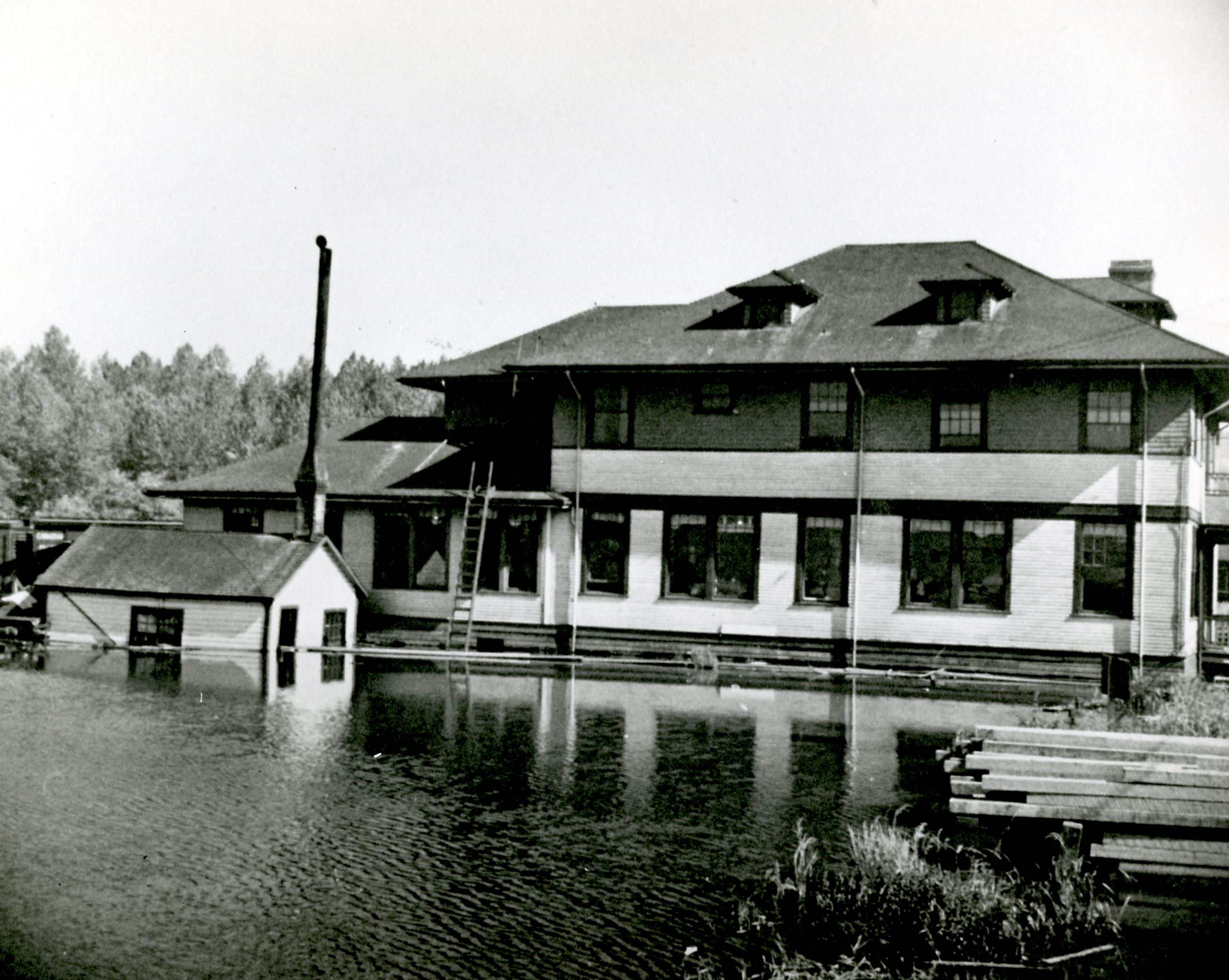 “One spring, I think it was 1948, we had a very bad flood in Coquitlam, very serious. The Fraser River had overflowed, and the men had to work night and day to keep the water from going throughout the city. All the available men worked placing sand bags by the side of the river, trying to control the flood. Someone had the great idea that we should do something for these men, as they were working so very hard to save Coquitlam from possible devastation. So we decided it would be real nice if we made them some pies. Guess whose house was chosen as the centre for all this pie-making? I offered it and I was glad I was able to do it.” 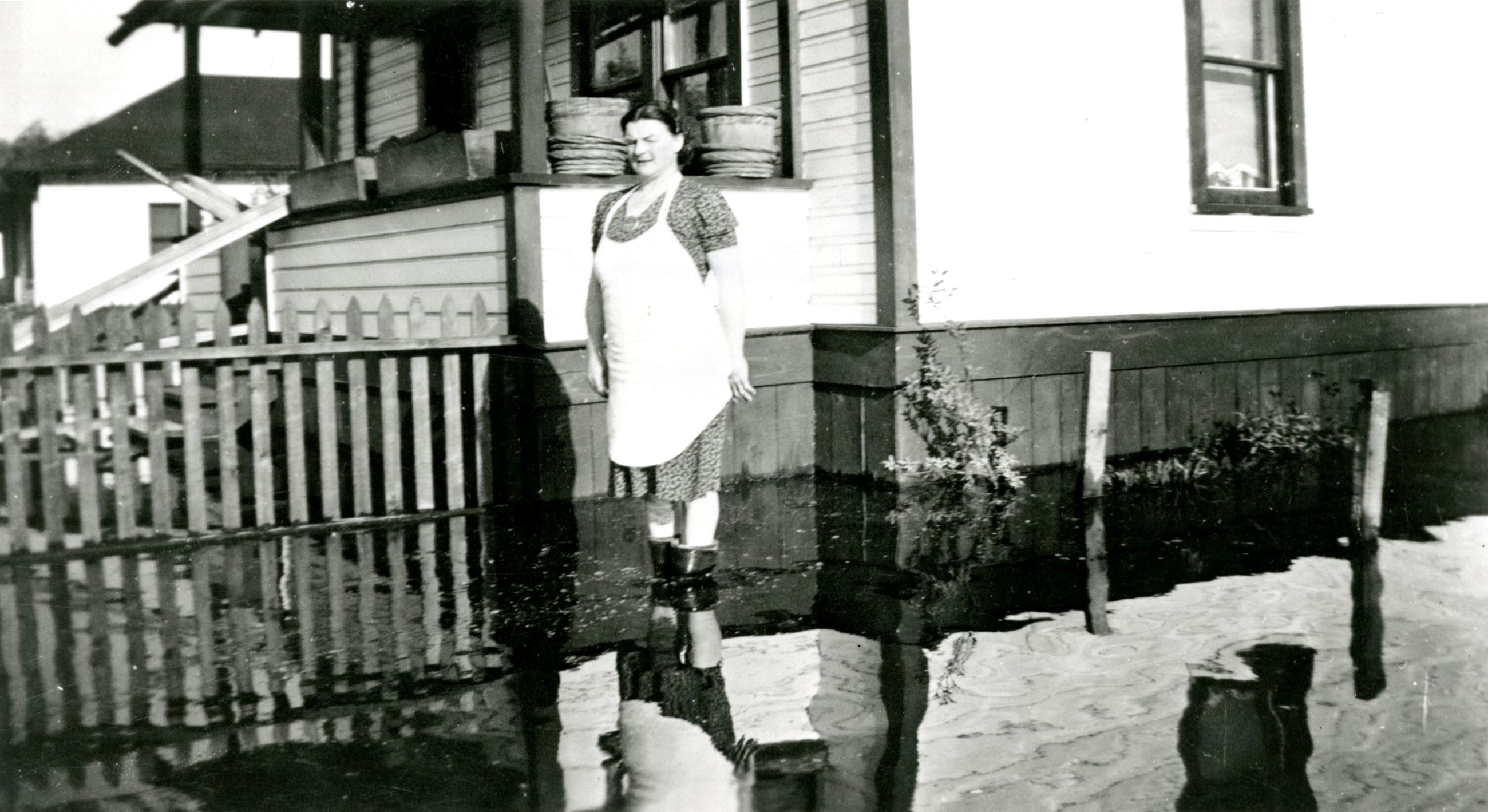 Mrs. Borghild Locken outside her home during the 1948 flood
(Source: City of Coquitlam Archives, C6.1036) 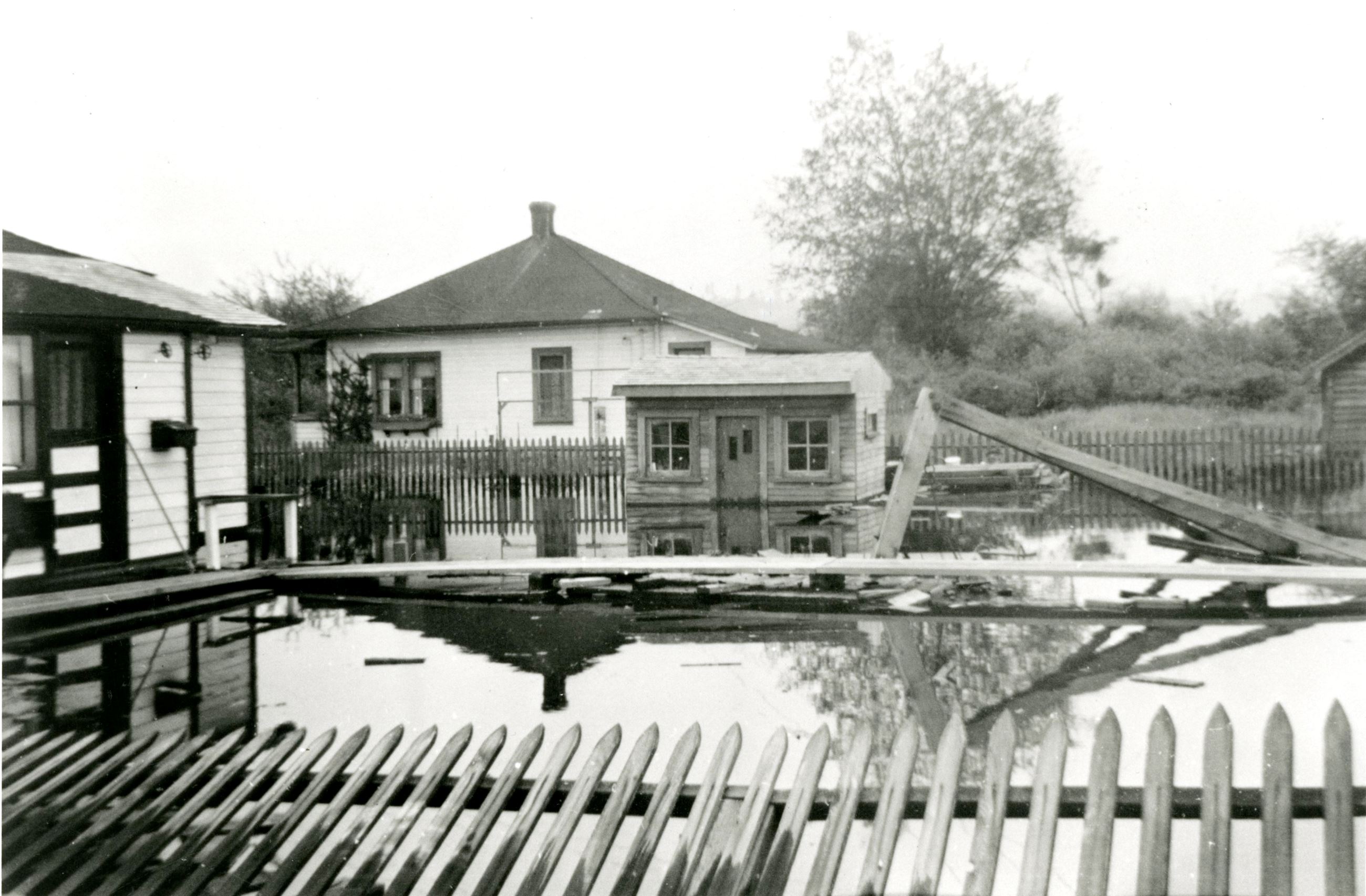 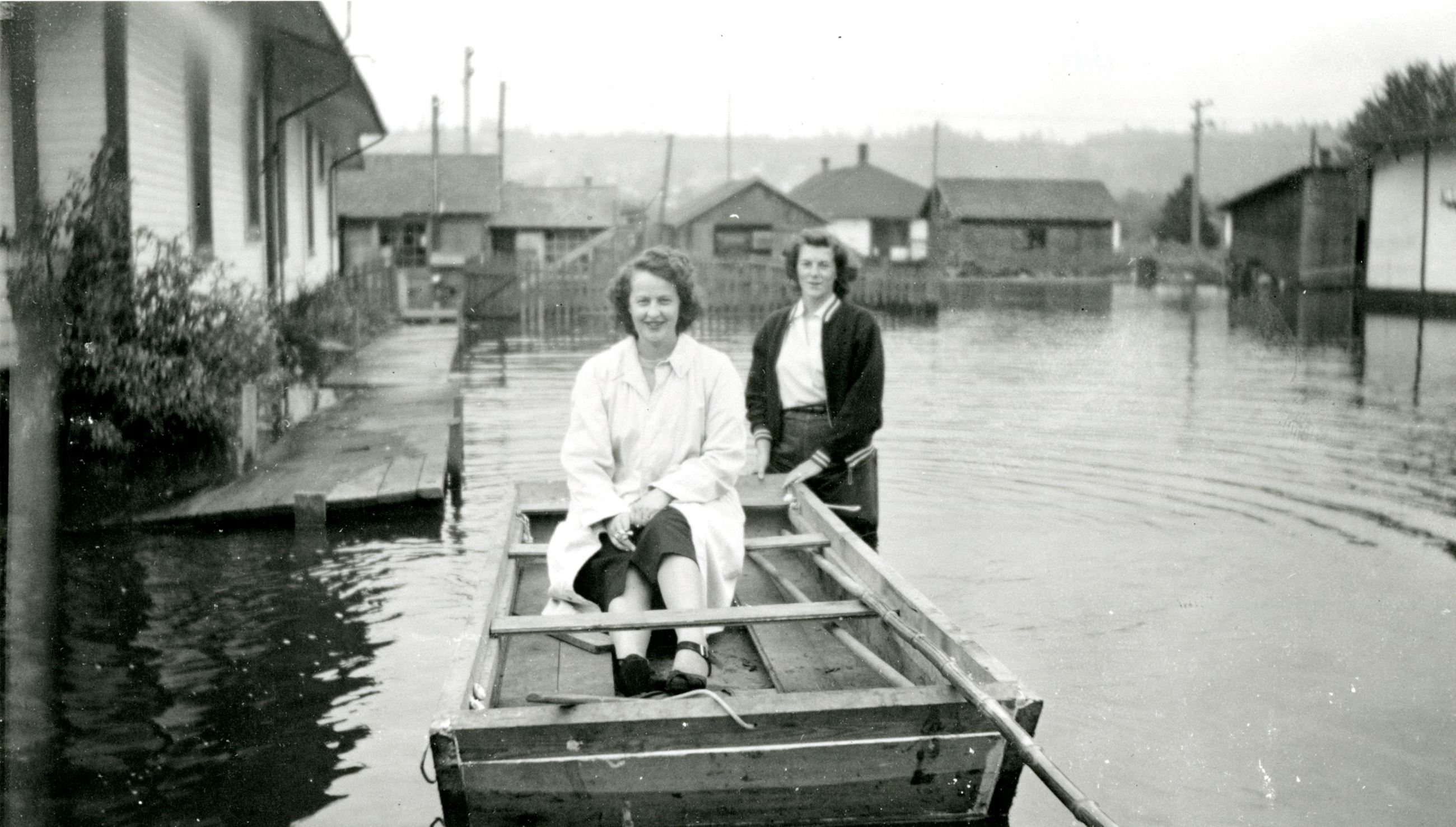 Kay Martin and Rosa Marie Crandell in a makeshift boat during the 1948 flood
(Source: City of Coquitlam Archives, C6.1034) 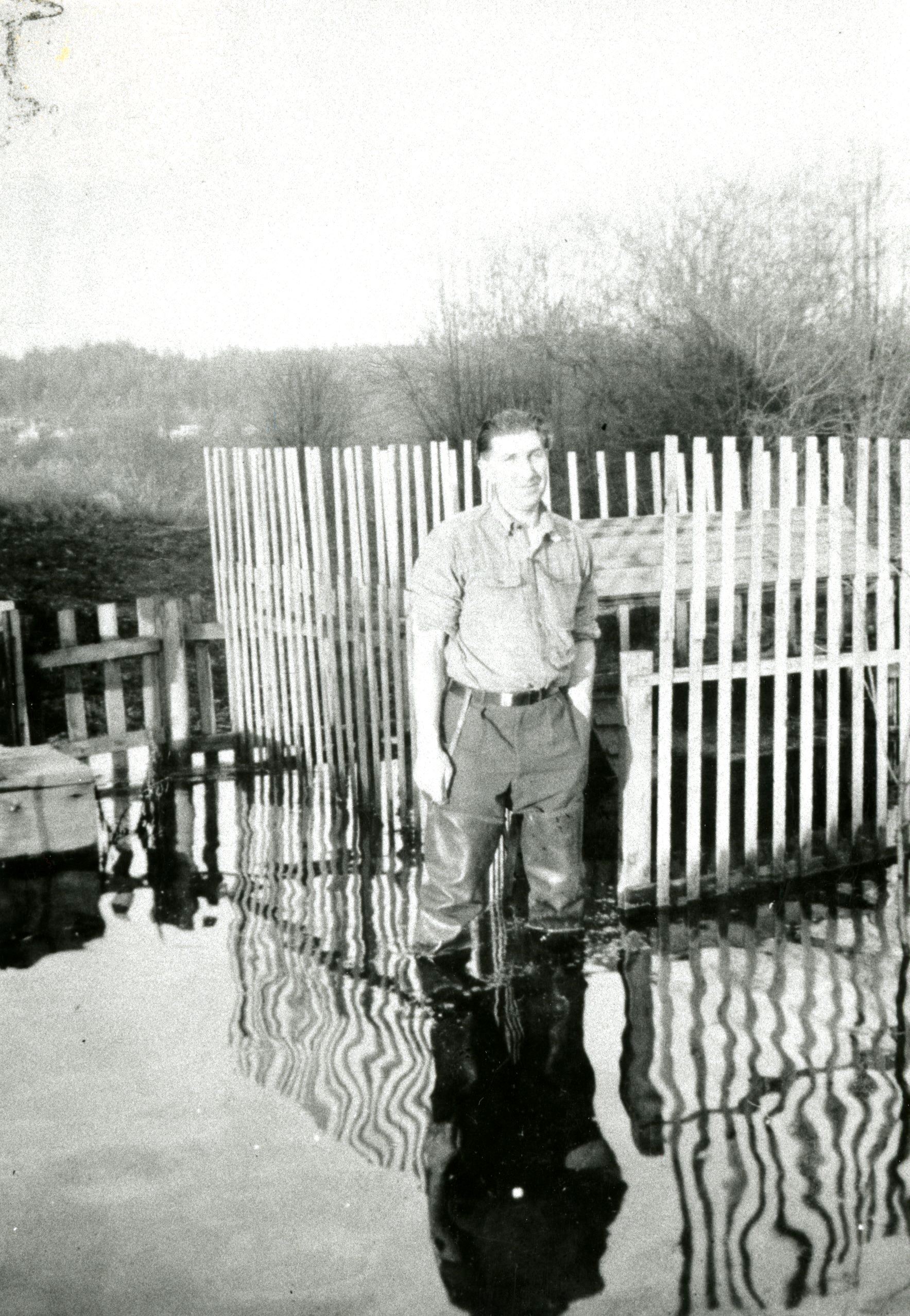 “During the big flood of 1948, they got us out of high school to work on the dikes at Colony Farm and Pitt Meadows. You had to fill sand bags. You worked around the clock and got good meals at Colony Farm- roast beef, mashed potatoes, you name it. They didn't pay you for this work. The police would come around and collect us; we would rather be on the dikes than in school, anyway. It lasted a couple of weeks, I think. We worked on dikes in New West, Lulu Island and Surrey. Part of Fraser Mills was under water. All kinds of debris, dead cattle, parts of homes, came floating down the river.” 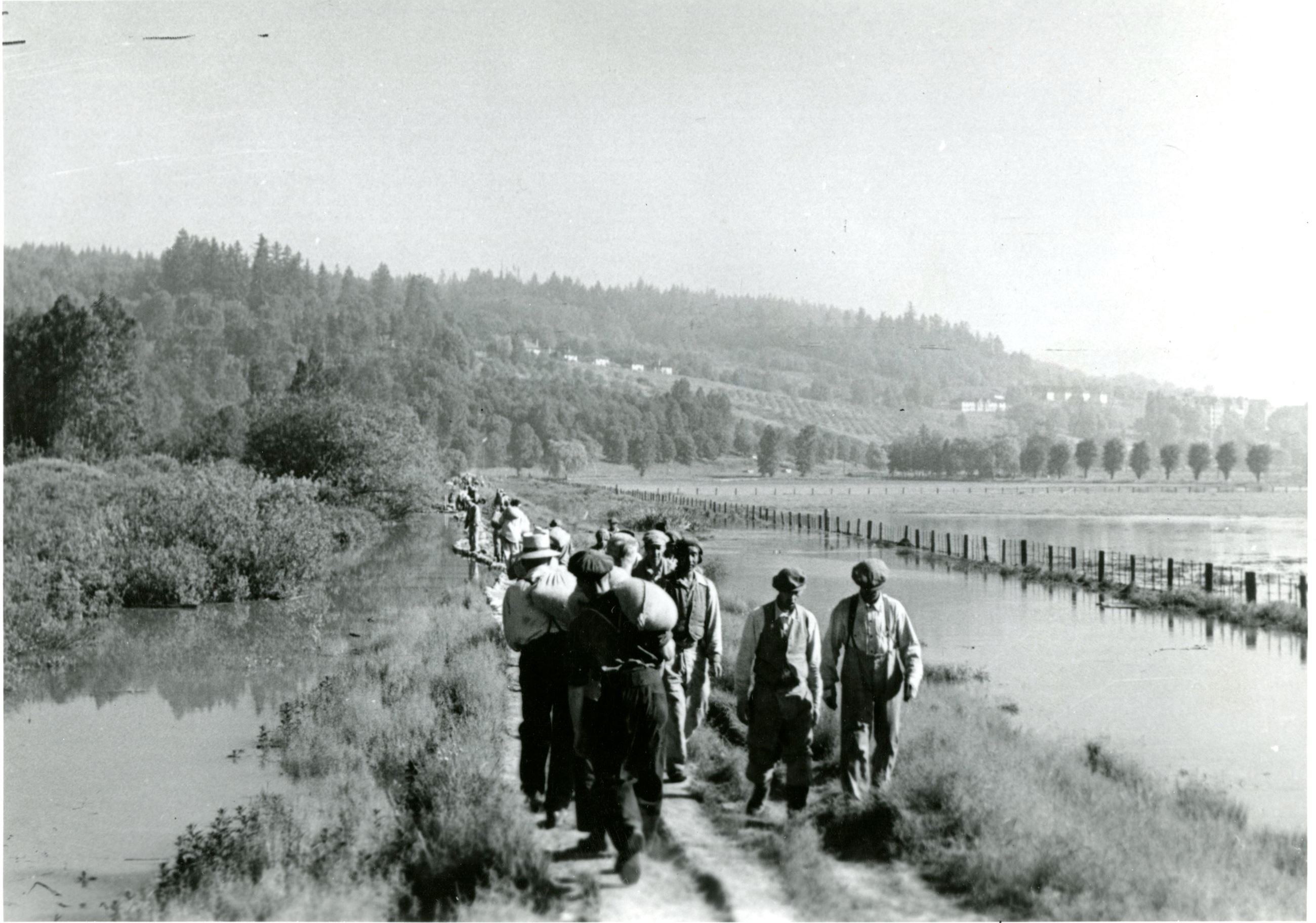 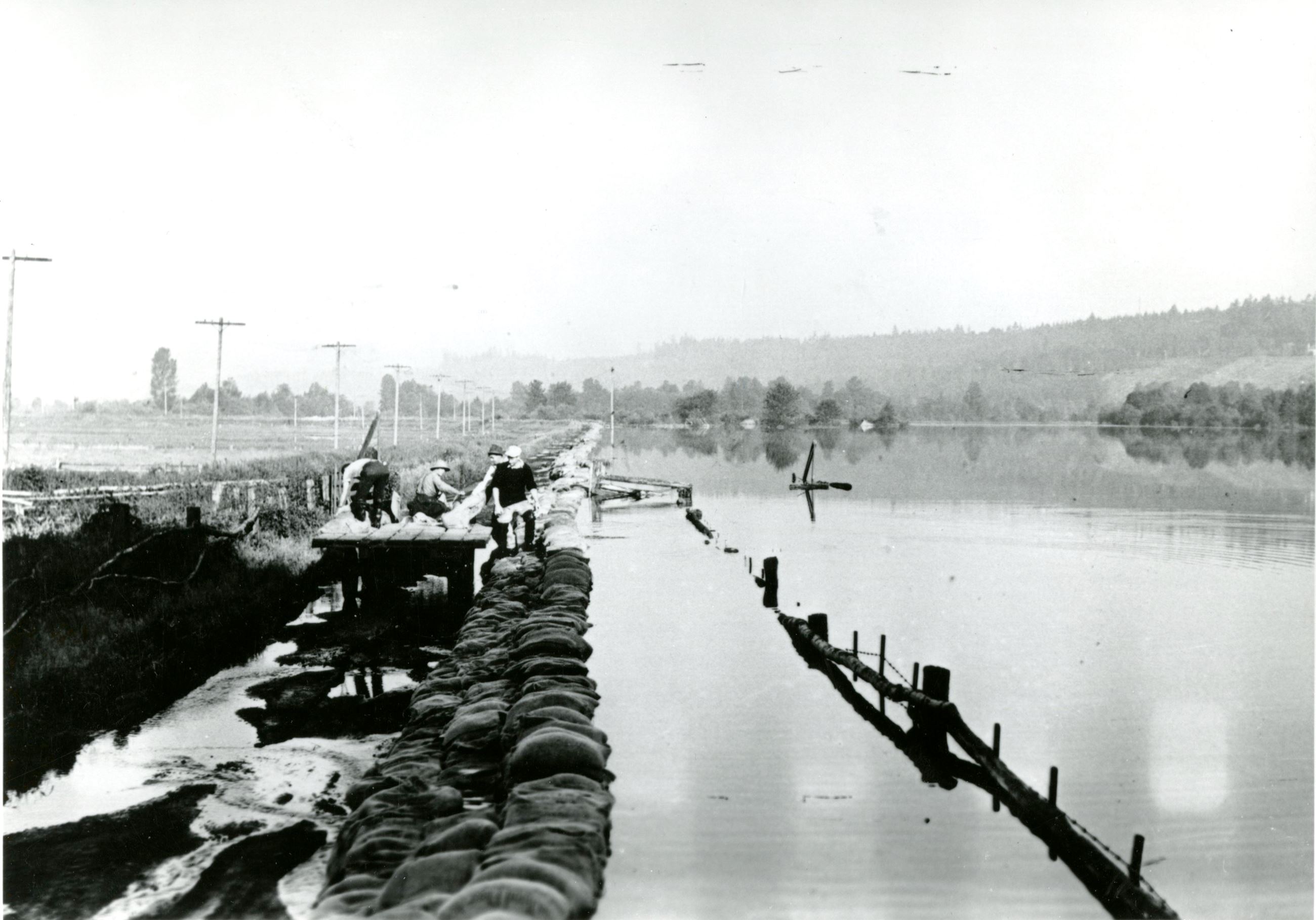 “I remember the big flood of 1948. All the farm land was flooded out. They worked around the clock, sandbagging and bulldozing. I went to the kitchen at Crease Clinic in a row boat. I had to cook all night long for the volunteers, and such. The farm animals were all moved up the hill.”

“You could still get to the farm along the road, though it was under water. The army was called in to help with the sandbagging. I'd guess the actual flooding lasted about three weeks, but it took an enormous amount of time to clean up and try to get the farm back to what it was…The flood completely destroyed the crops. They had to drain off the water and then burn off the grass, and the stench was something terrible that winter. Then the soil had to be turned over and replanted.”

According to the Fraser Basin Council “today in the Fraser Basin, there are about 600km of dikes, 400 flood boxes and 100 pump stations to protect communities and infrastructure from flooding.”

Currently in development is the Lower Mainland Flood Management Strategy (LMFMS) which is “aimed at reducing flood risk and improving the flood resilience of communities along BC’s lower Fraser River and south coast – from Hope to Richmond and from Squamish to White Rock.” The work on the strategy is expected to be released for public comment in 2021. For more information, visit fraserbasin.bc.ca

The City of Coquitlam has an extensive flood response plan that includes assessment of flood risk areas, daily monitoring of river levels, evacuation planning and a flood action plan. You can read more about Coquitlam’s flood preparedness here.