Coquitlam Centre: 40 Years in the Community

There comes a time in the history of a region when events transcend tradition. The region rises to a new level of existence. The past is outdistanced. The Grand Opening of the Coquitlam [Centre] will have been, when over, an event to raise the standard of living in the Lower Mainland region. (Enterprise Newspaper, August 14, 1979)

To mark the 40th Anniversary of Coquitlam Centre, this exhibit explores the history of the mall by showcasing some of the photographs and newspaper records preserved by the City of Coquitlam Archives.

In the early 1970s, the area that now forms Coquitlam’s Town Centre contained very little residential or commercial development. To get a sense of the area before Coquitlam Centre was built, use our "Slide Back in Time" map viewer to compare aerial photographs from 1963 to today. 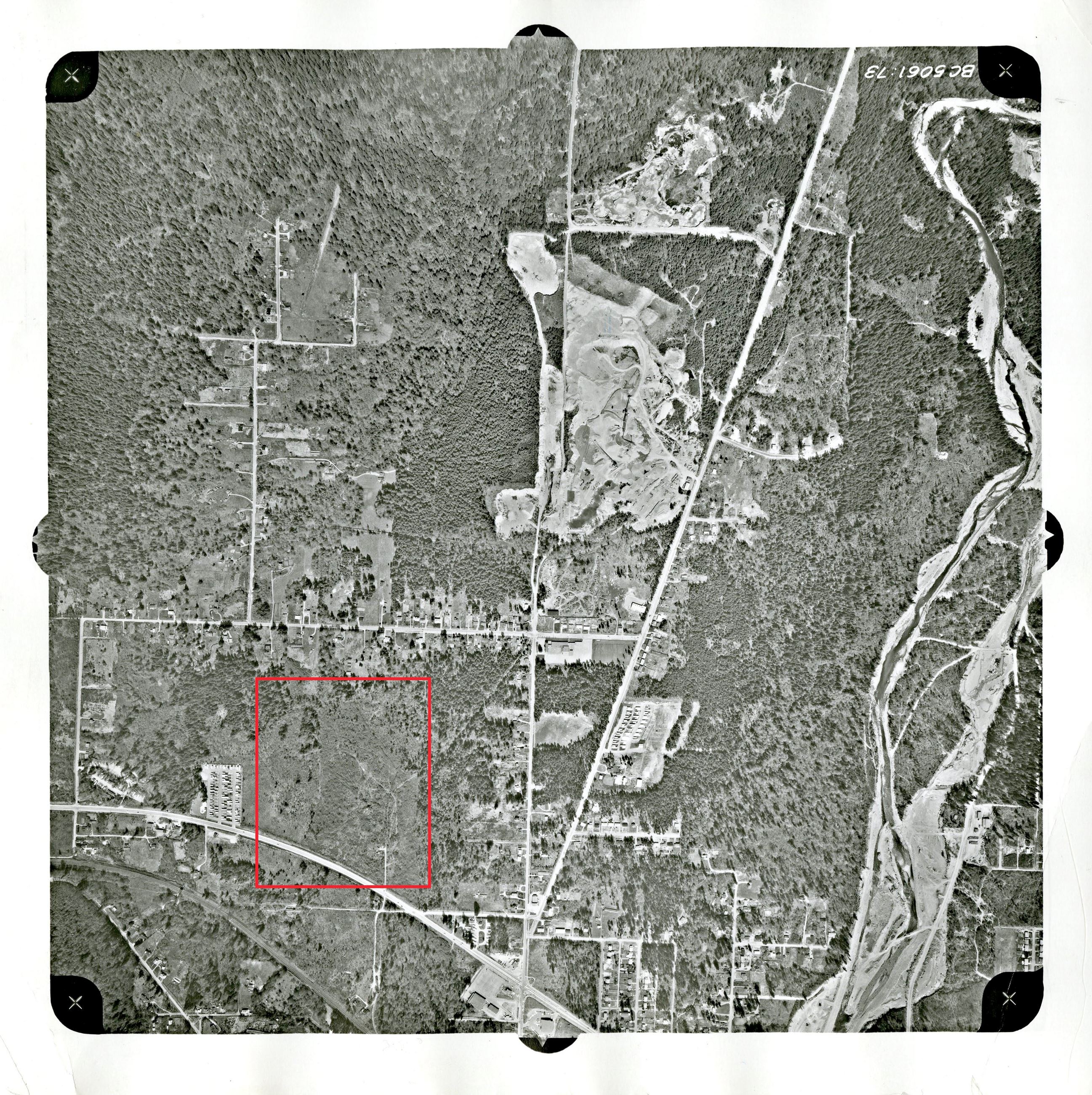 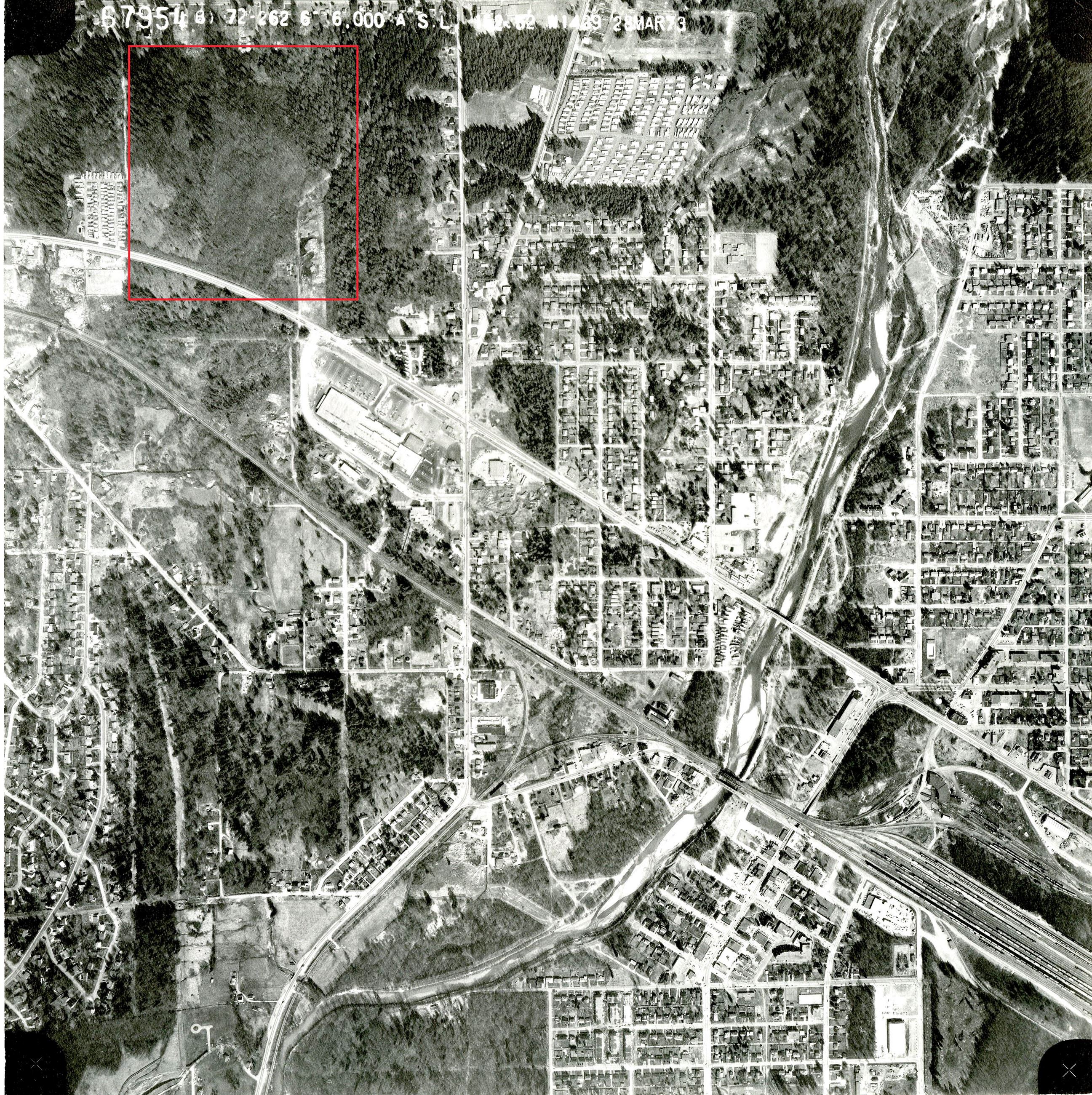 In 1973, a report was presented to Coquitlam Council by the Director of Planning outlining the proposed plan for the development of a new Town Centre, covering an area of more than 300 acres. The Columbian Newspaper reported that the plan included a proposed shopping centre twice the size of Burnaby’s Lougheed Mall. (Columbian Newspaper, September 11, 1973)

In 1976, developer Ira Young asked Council for a special meeting to be convened to enable the presentation of the proposed plan for Coquitlam Centre. The team from Ira Young and Associates presented the plan to Council on April 12, 1976. In the presentation, the developers explained that the Coquitlam Centre could act as a catalyst for the proposed Coquitlam Town Centre. The proposal was then passed along to the Land Use Committee for review. By 1977, all of the contracts were settled and a ground breaking ceremony was held on May 26, 1977. 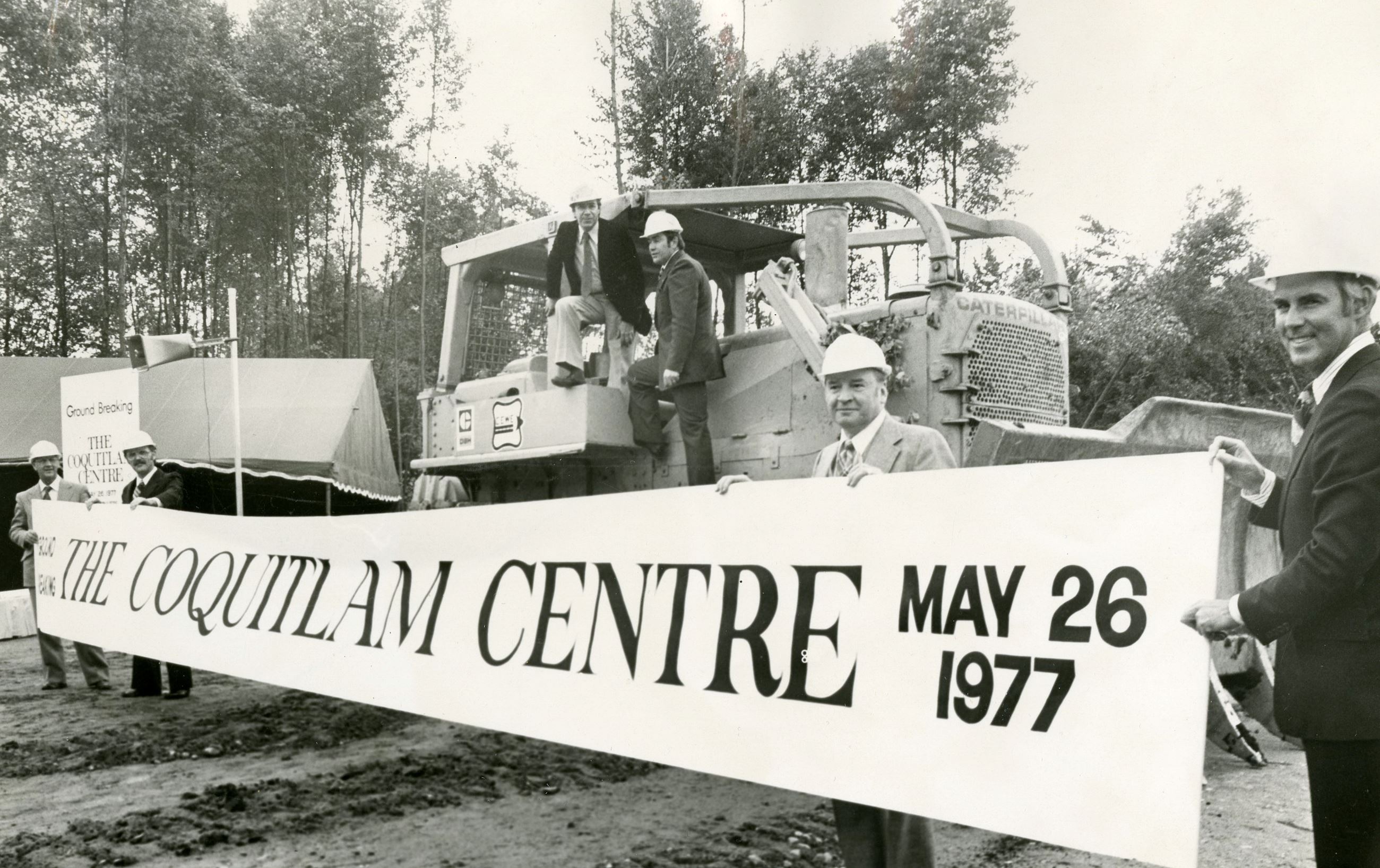 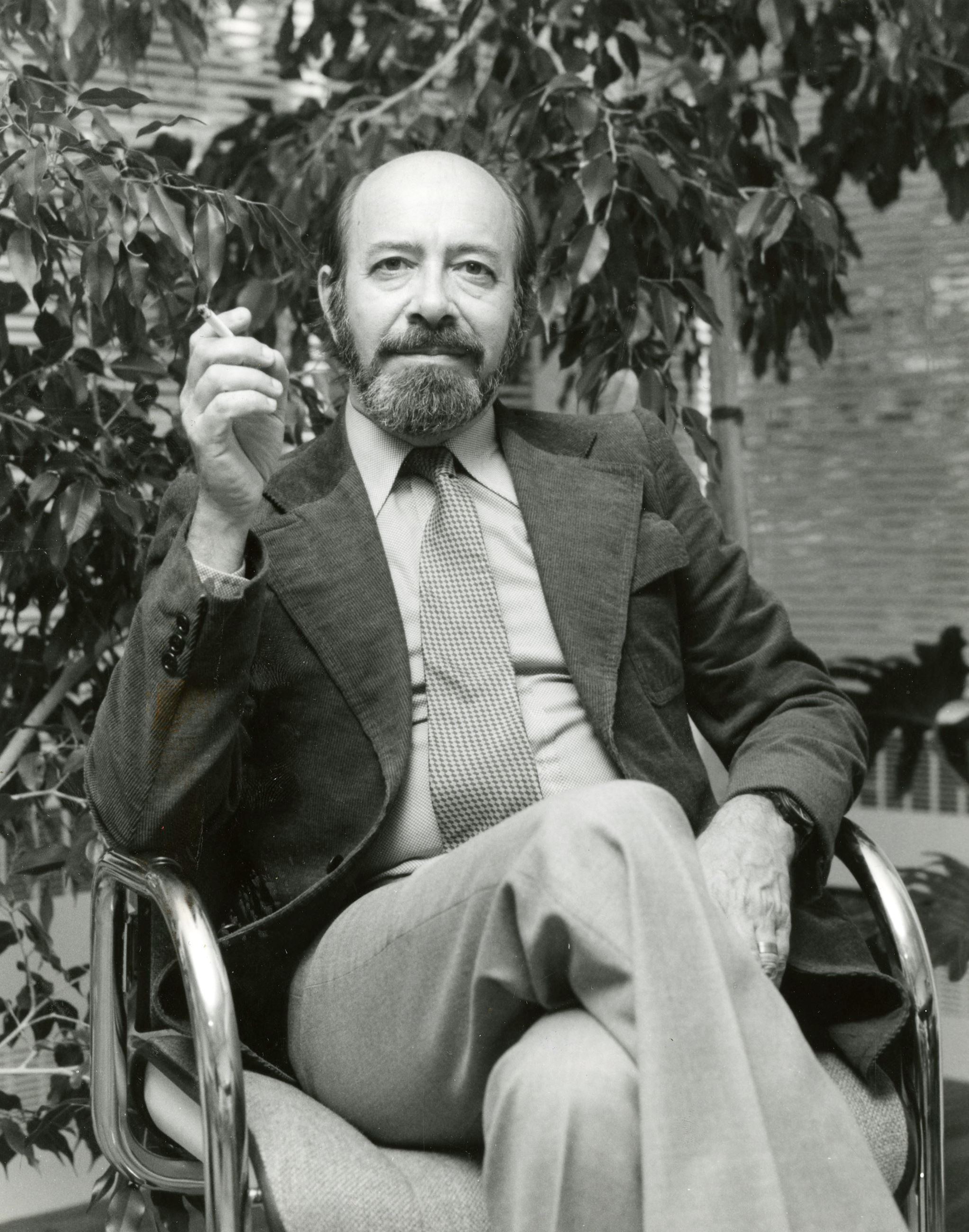 On May 27, 1977, the Columbian Newspaper wrote about the Coquitlam Centre project:

Developers unveiling a model of the $50 million Coquitlam Centre Thursday said the shopping complex is the largest under one roof in the Lower Mainland…The project, slated for completion in August 1979, will house three major department stores at one location – Eaton’s, Woodward’s, and The Bay – plus 130 other retail stores…The building, which will be serviced by 4,000 parking stalls, is designed by the architect B. James Wesley of Edmonton in conjunction with Hanseon-Erb Architects of Vancouver…It is a two-storey structure of about 800,000 square feet in the shape of a cruciform. It is entirely enclosed and climate-controlled and features skylighting and landscaping inside and out…The project should spark intensive development around the area, in the same fashion apartment buildings have cropped up beside Loughheed Mall. 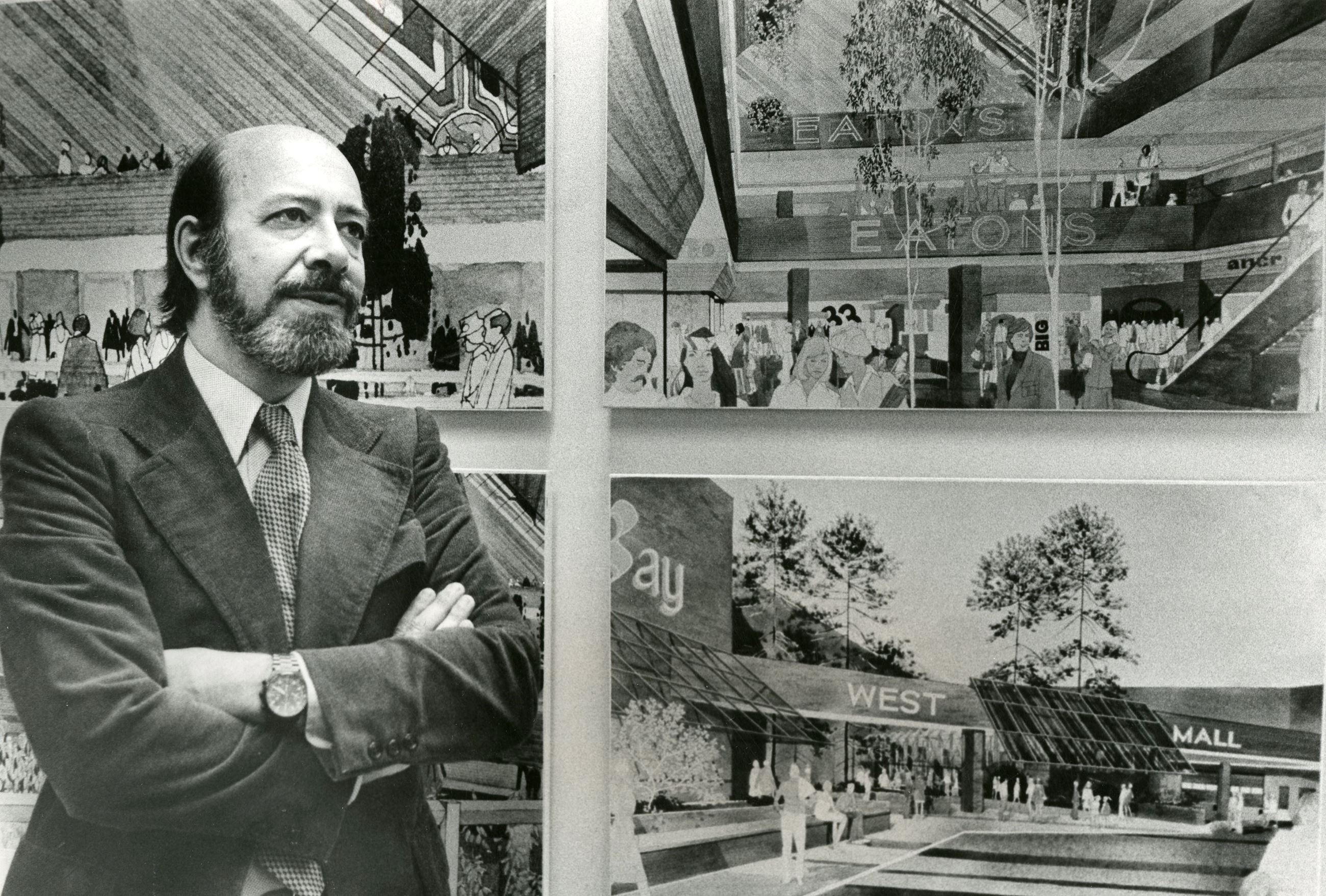 Coquitlam Centre was recognized for its impressive design elements, most notably its stained glass windows. The Columbian Newspaper quoted Young as saying that the $3 million in extra features at the mall are its major distinguishing points from other such centres. These include a unique computerized air conditioning system, 1000 tropical plants and trees, 20 works of sculpture, and one of the world’s largest modern stained glass windows. (Columbian Newspaper, December 13, 1978)

Still in place today, the impressive stained glass panels in the roof of Coquitlam Centre were the crown jewel of the mall project. The panels are ten feet wide and run the length of the mall along one side of the roof’s apex. In 1978, the developers pronounced that the stained-glass panels, being manufactured in Vancouver, will be the largest in the world. (Columbian Newspaper, December 13, 1978)

The finished product included two hundred glass panels that cover seven thousand square feet. The stained-glass cost close to $350,000 to design, produce, and install. On the eve of Coquitlam Centre’s opening in 1979, the Columbian Newspaper wrote:

The windows were designed by BC Artists Ray Friend, Anna Gustafson, and Lutz Haufschild, and were fabricated by the specialists at Granville Glass. Ray Friend’s creation for Woodward’s court, an abstract design of billowing cloud-like forms, transforms the floor below into pools of pastel shapes. Anna Gustafson’s mosaic of brilliant colours accents Eaton’s court with light that pours through 6,500 separate pieces of glass, only five inches square. The Bay court is filled with light flowing through Lutz Haufschild’s beautiful flowing designs. (Columbian Newspaper, August 14, 1979)

In addition to the magnificent windows, twenty works of sculpture by local artists were placed throughout the mall. In addition to the art pieces, the mall interior was adorned with lush tropical plants imported from Florida. The Columbian Newspaper reported that the mall contained 110 tropical trees and 800 to 900 plants, including rubber, weeping fig, Indian laurel, cocoa palms, and screw pines. (Columbian Newspaper, August 14, 1969) 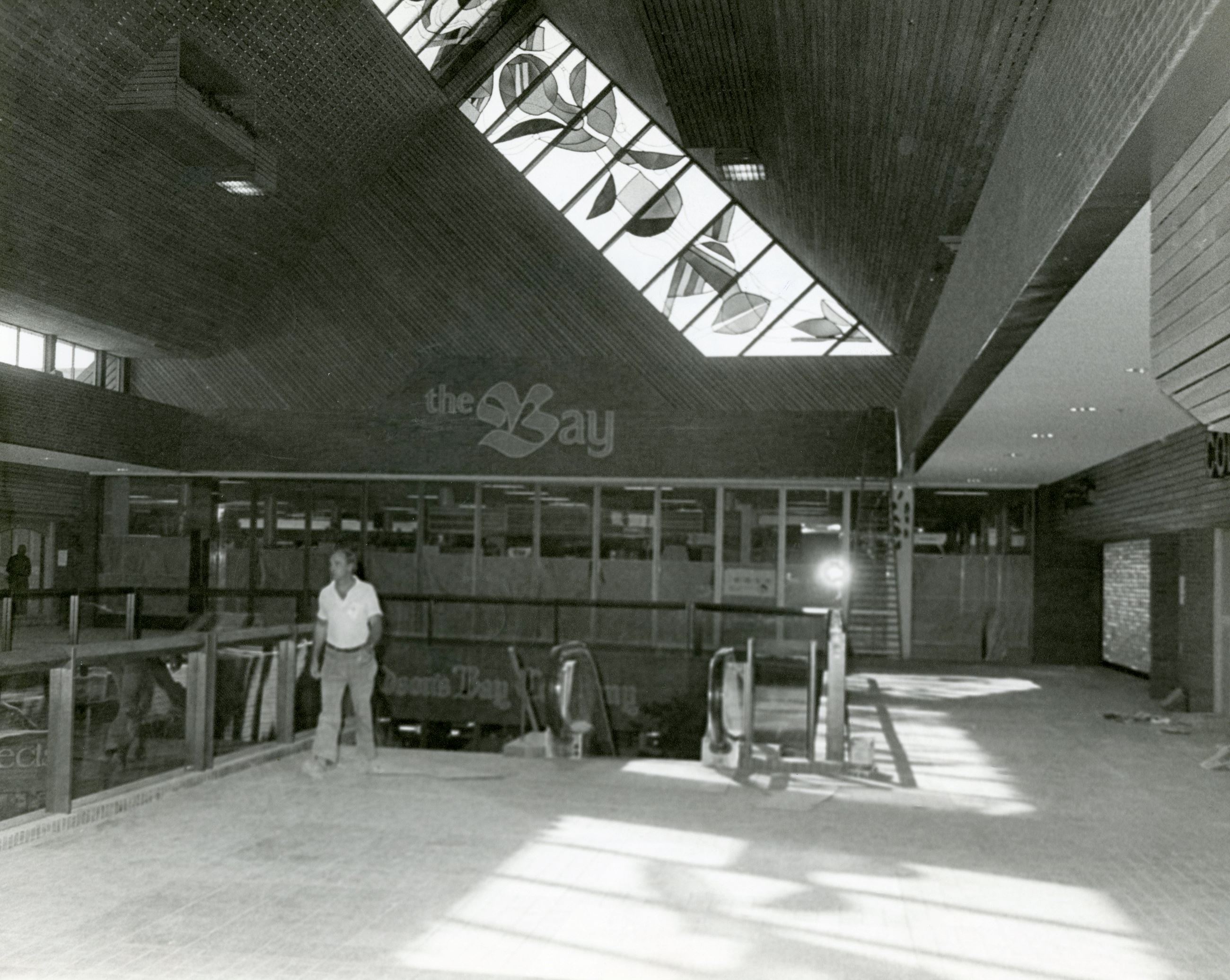 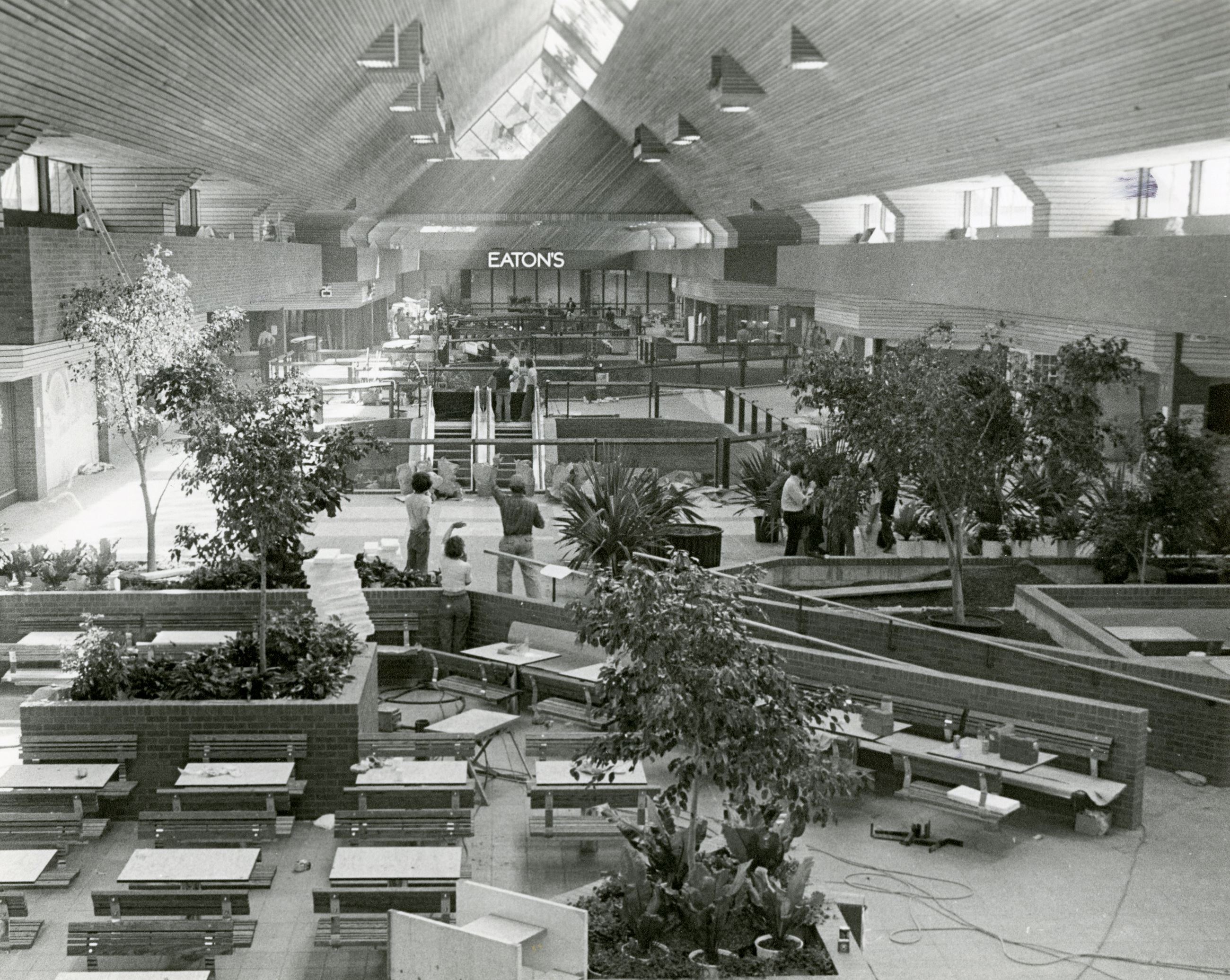 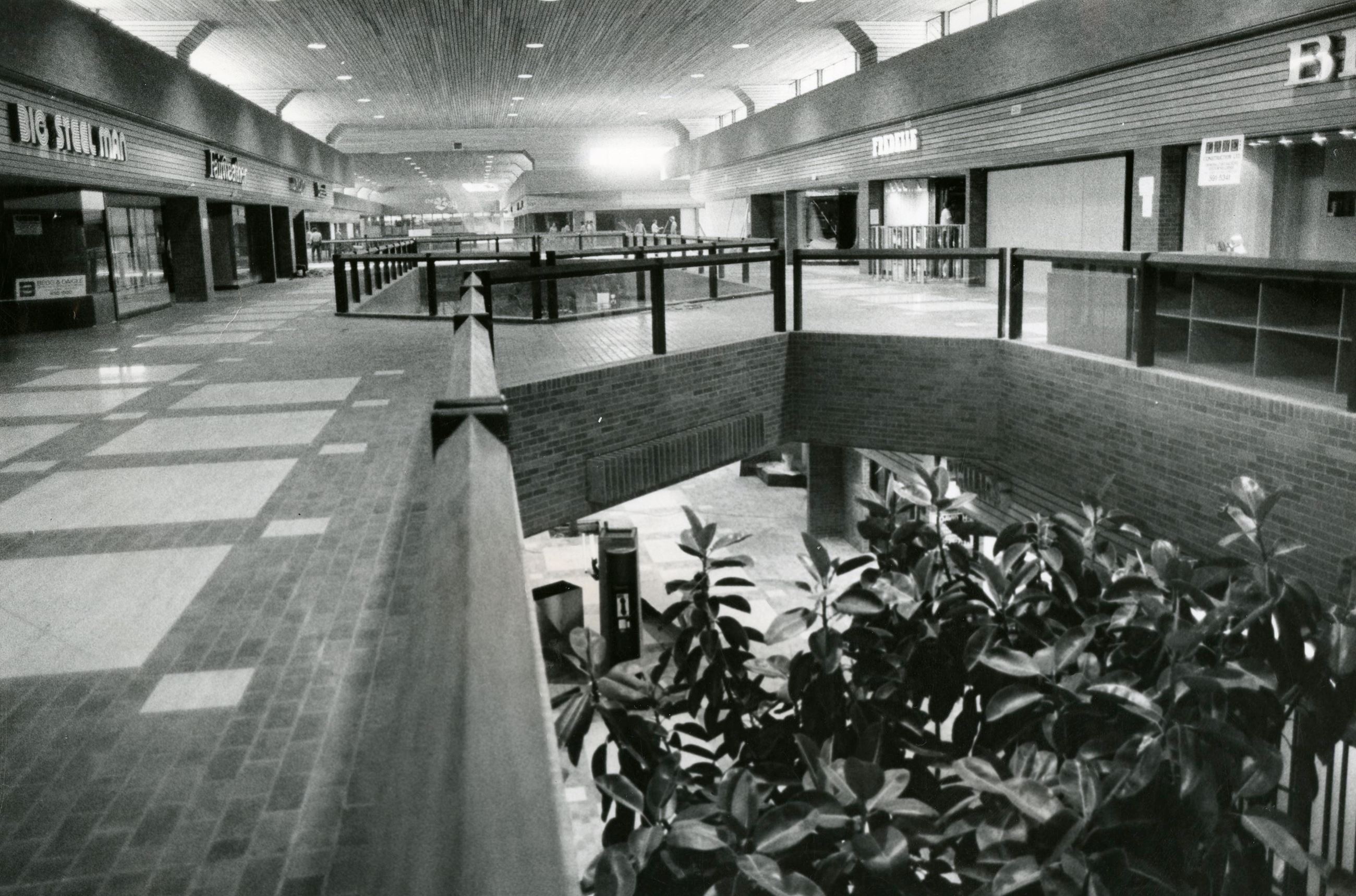 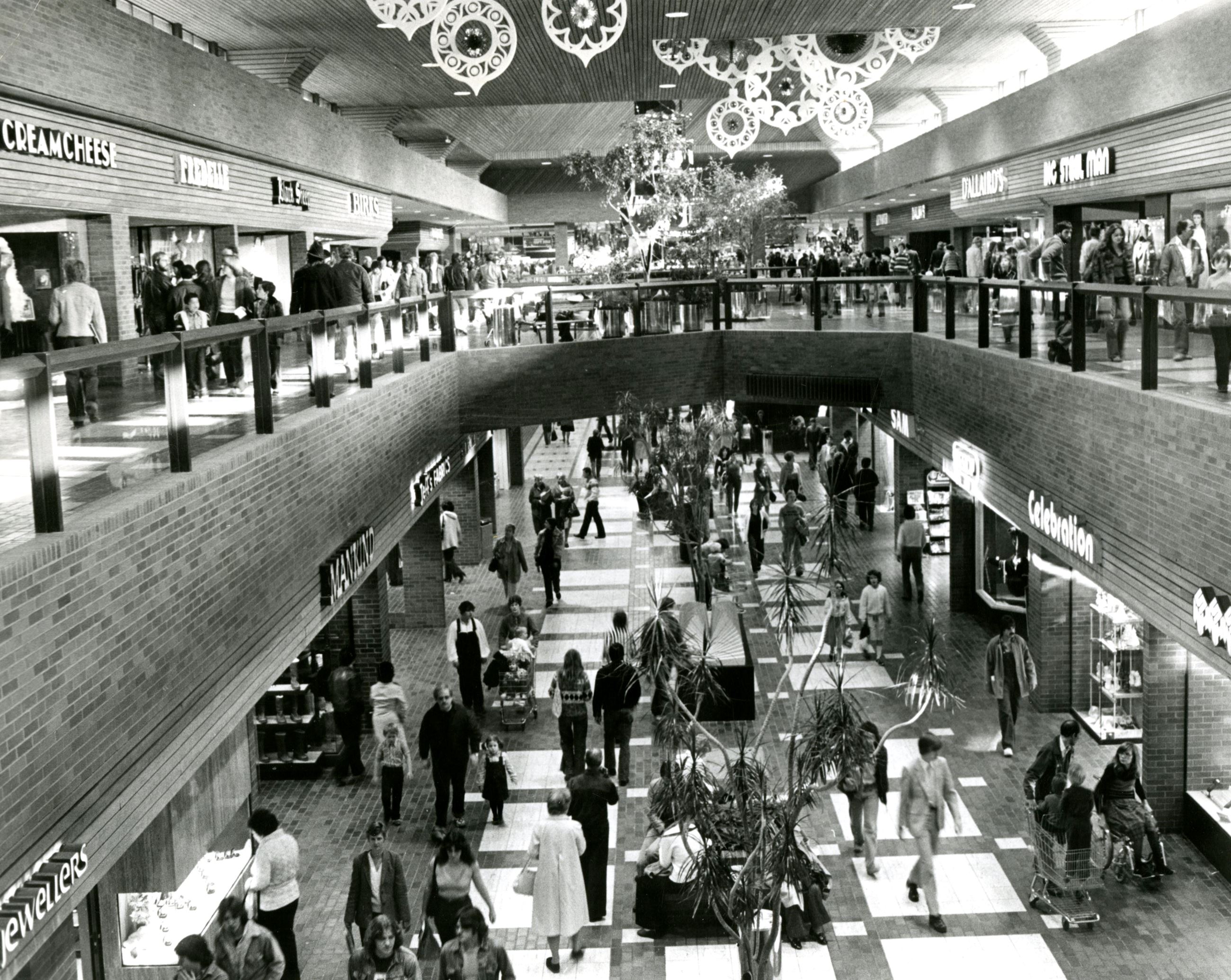 Coquitlam Centre shopping mall opened this morning at 9:30...The mall’s massive 4,200 stall parking lot was filled immediately and cars quickly packed side streets and the K-Mart parking lot across Barnet Highway. Coquitlam RCMP said traffic to the mall had been backed up in all directions since 10 am. (Columbian Newspaper, August 15, 1979)

Coquitlam Centre was developer Ira Young’s most notable real estate accomplishment, winning the 1980 Merit Award from the International Council of Shopping Centres and the 1982 Governor General’s Award for Architecture. 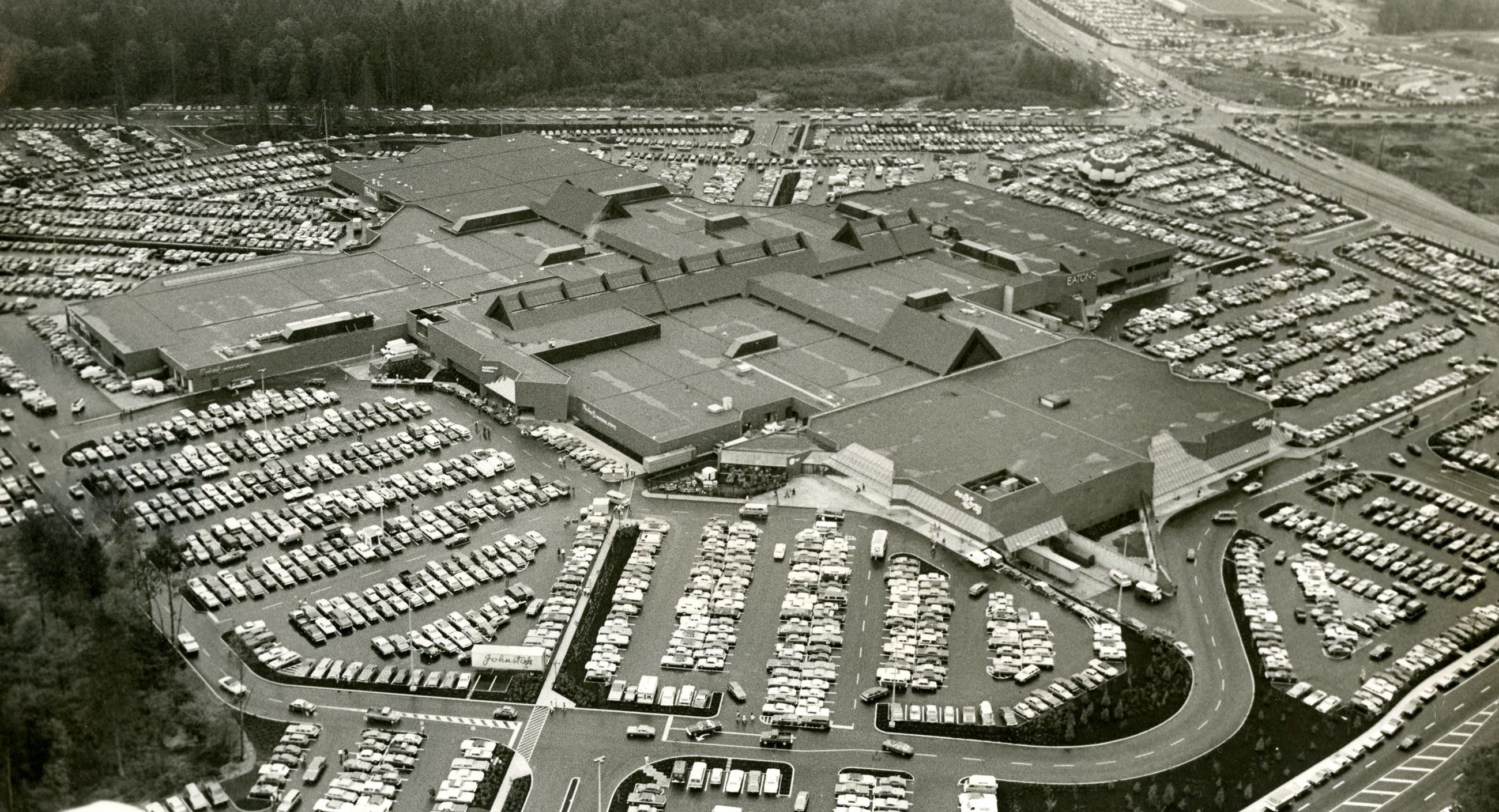 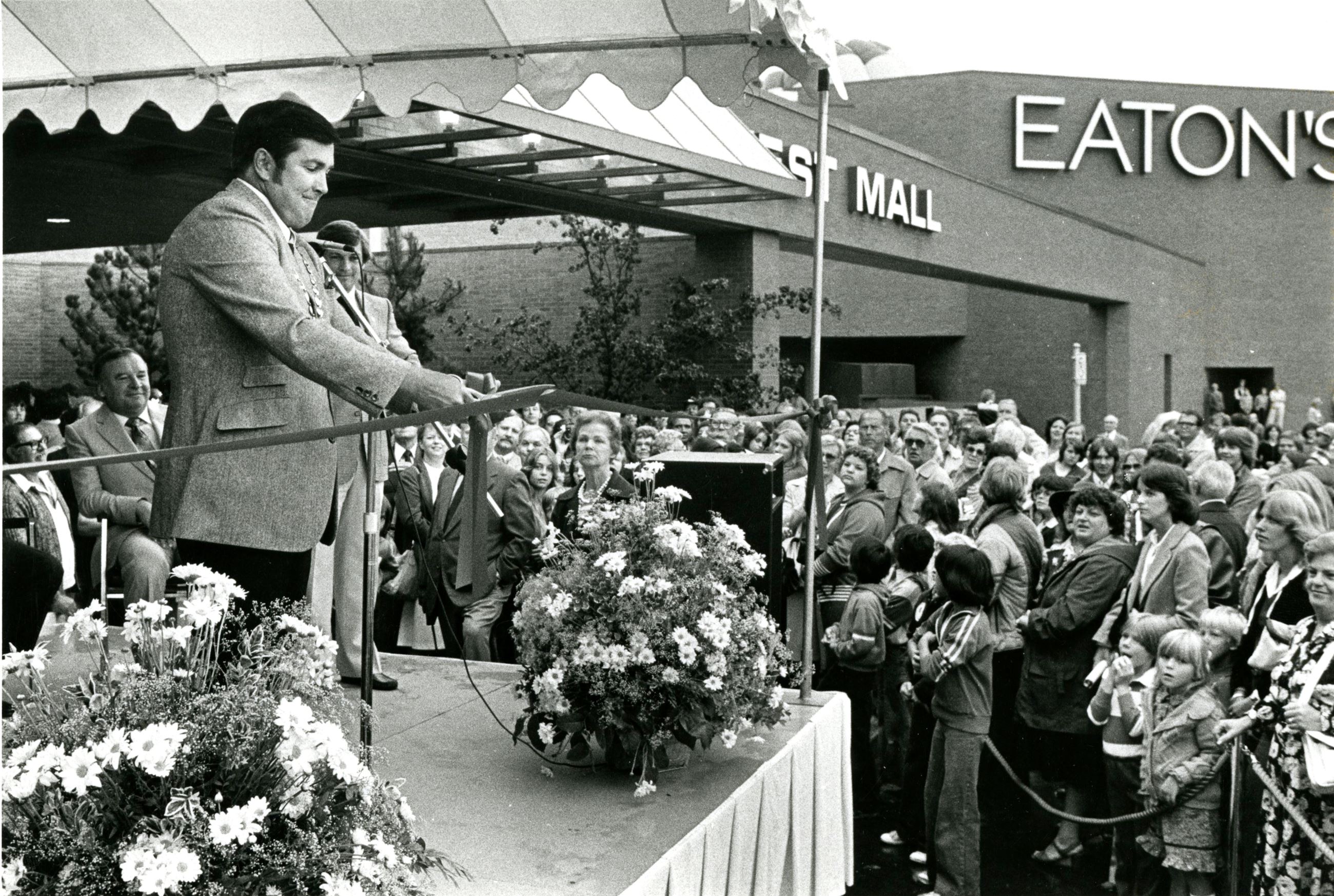 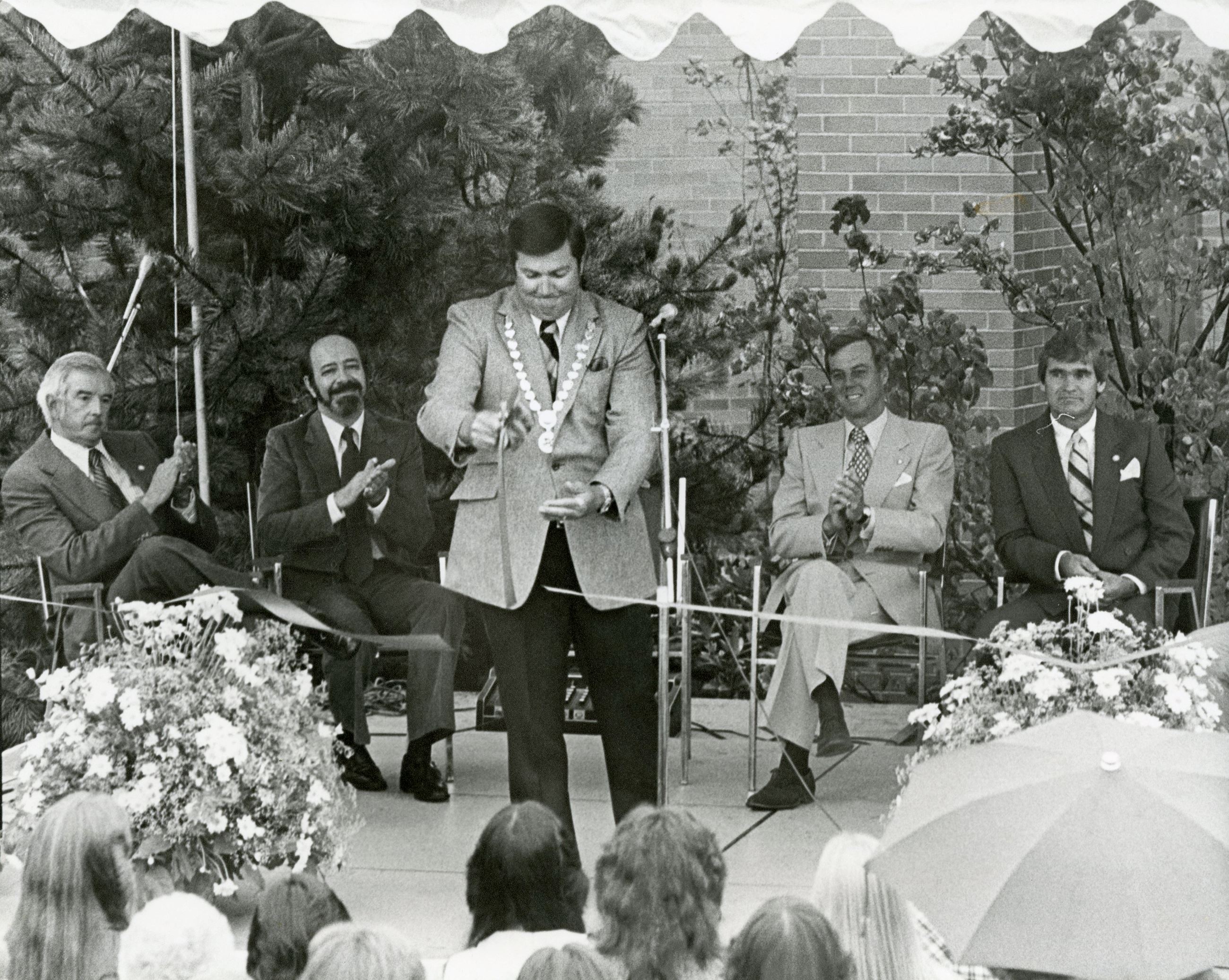 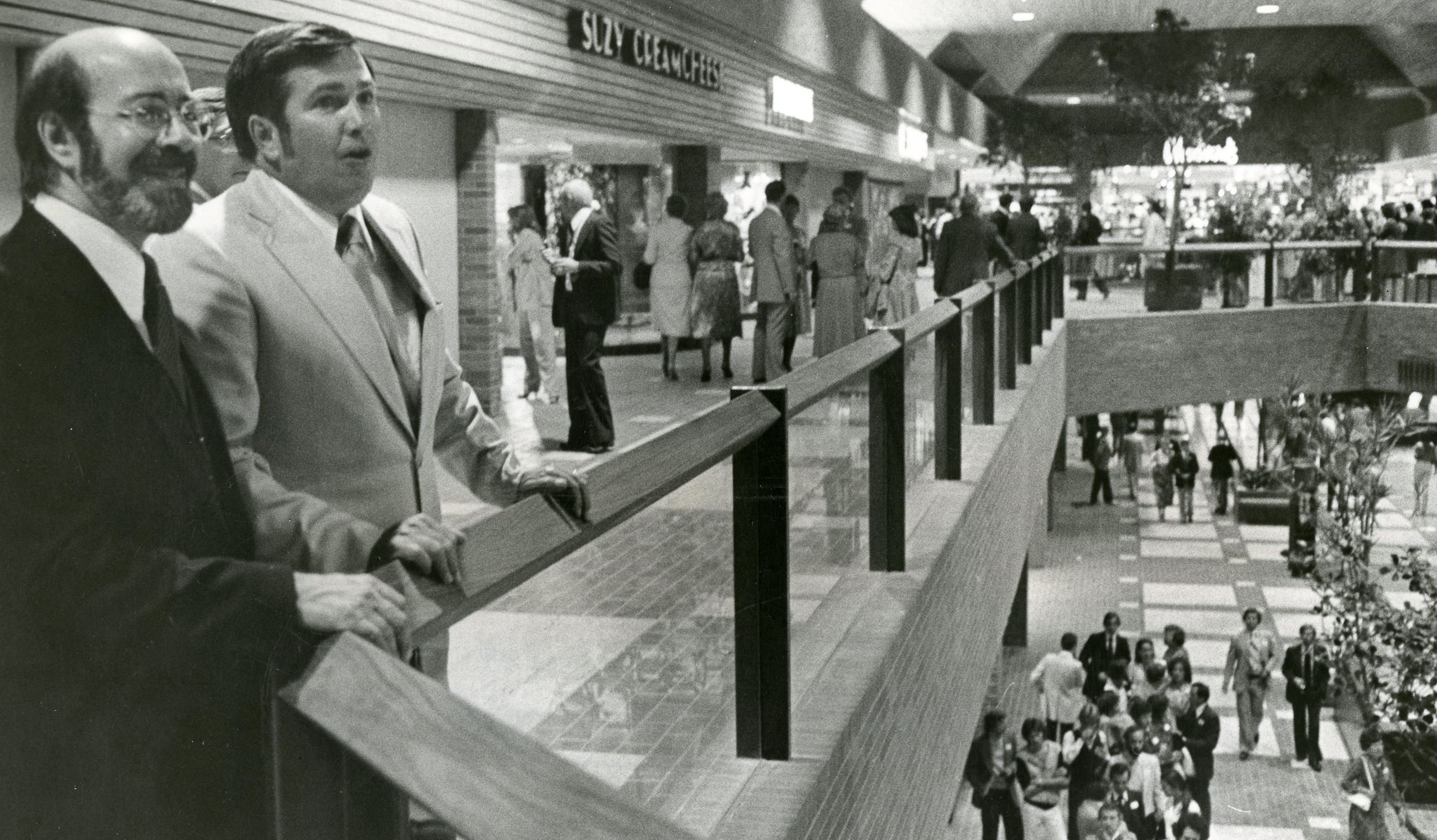 Part of the Community for 40 Years

Coquitlam Centre quickly became an integral part of the community and, as predicted, was the catalyst for the development of Coquitlam Town Centre. The mall is now at the heart of a bustling core that includes City Hall, Douglas College, Evergreen Cultural Centre, City Centre Aquatic Complex, and the jewel that is Town Centre Park.

Over Coquitlam Centre’s 40 years, celebrities like designer Bob Mackie and gymnast Nadia Comaneci have visited; holidays have been celebrated; carnivals, fashion shows, and tournaments have come and gone; and community has been developed, inside and outside the mall. 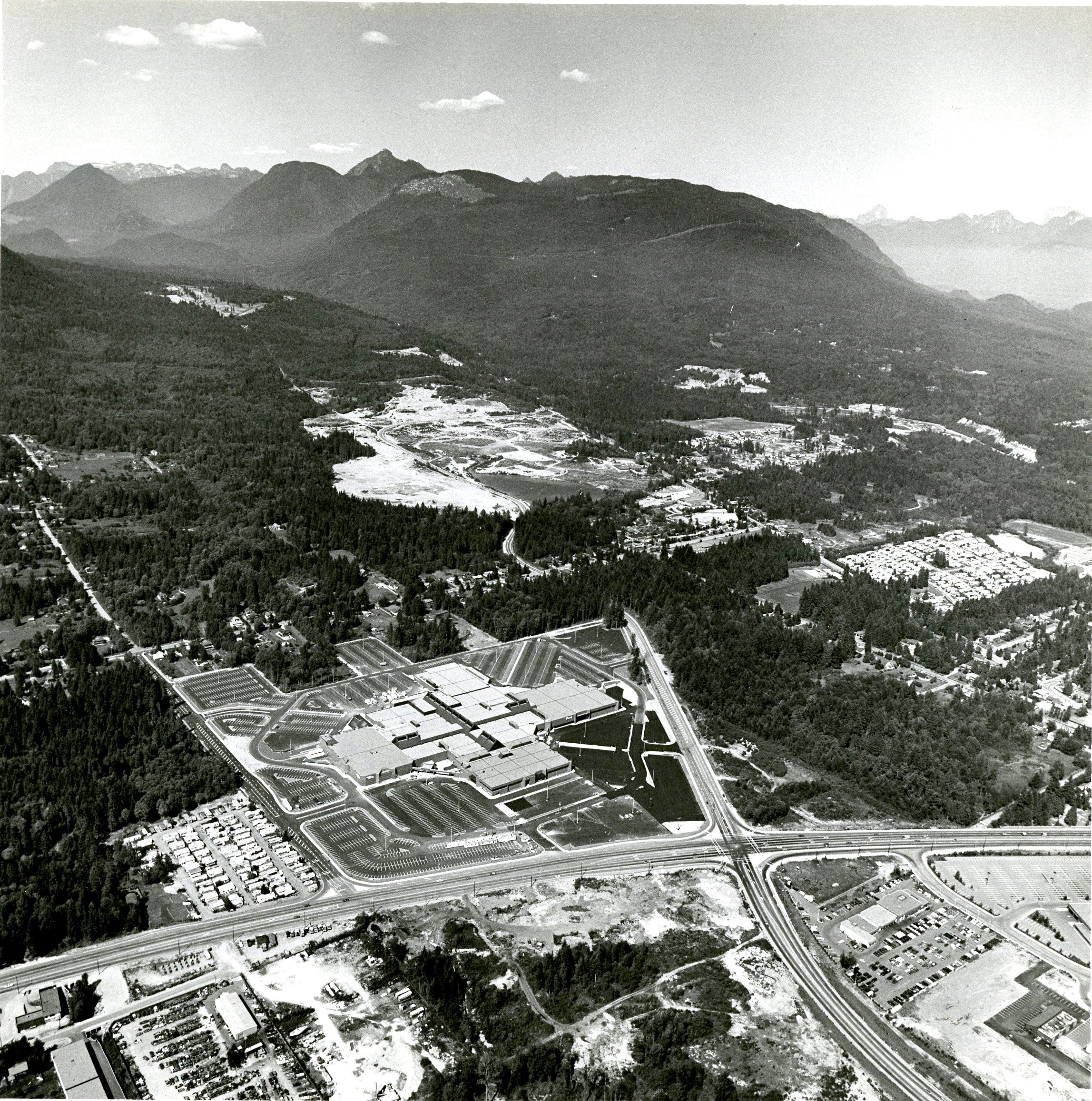 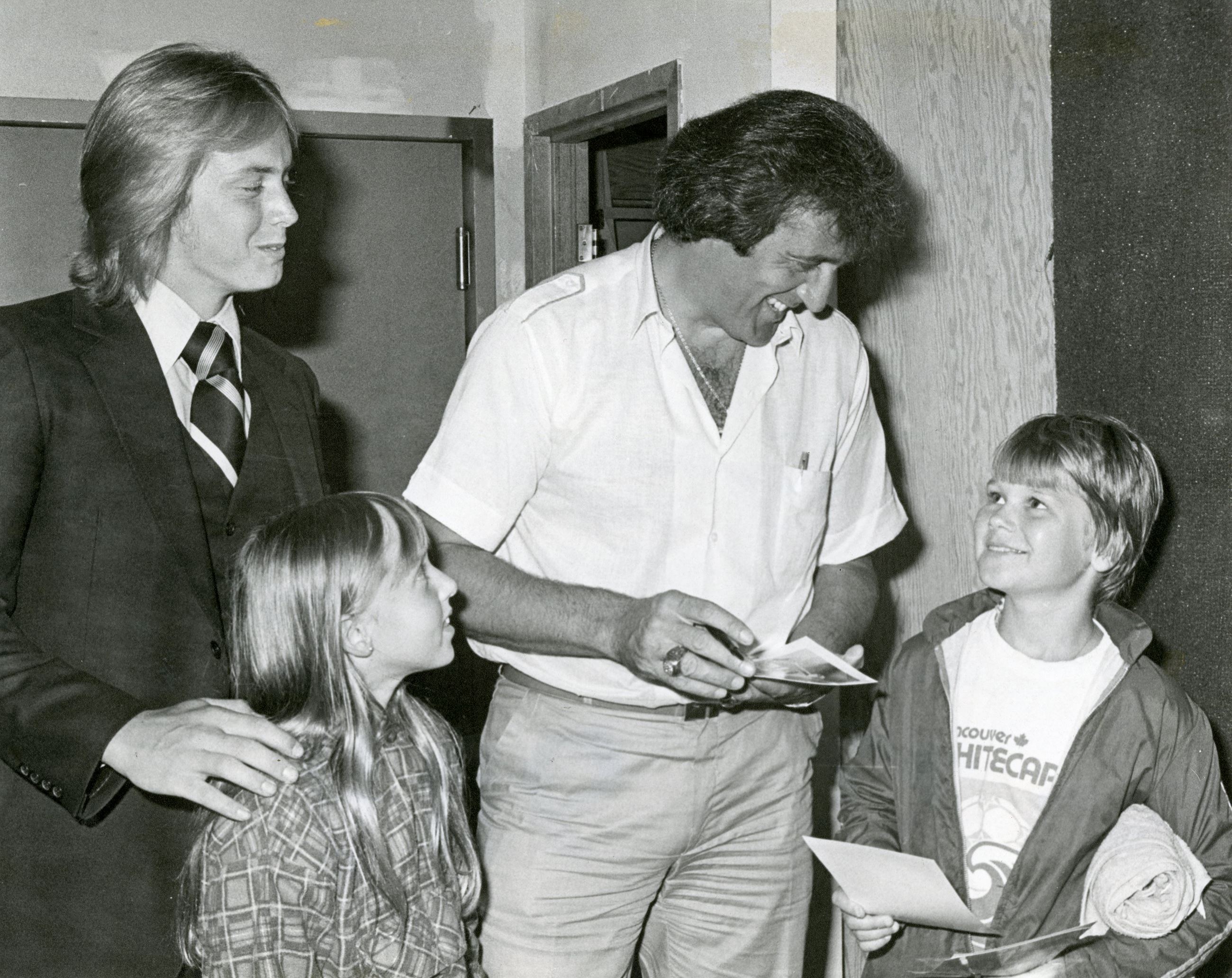 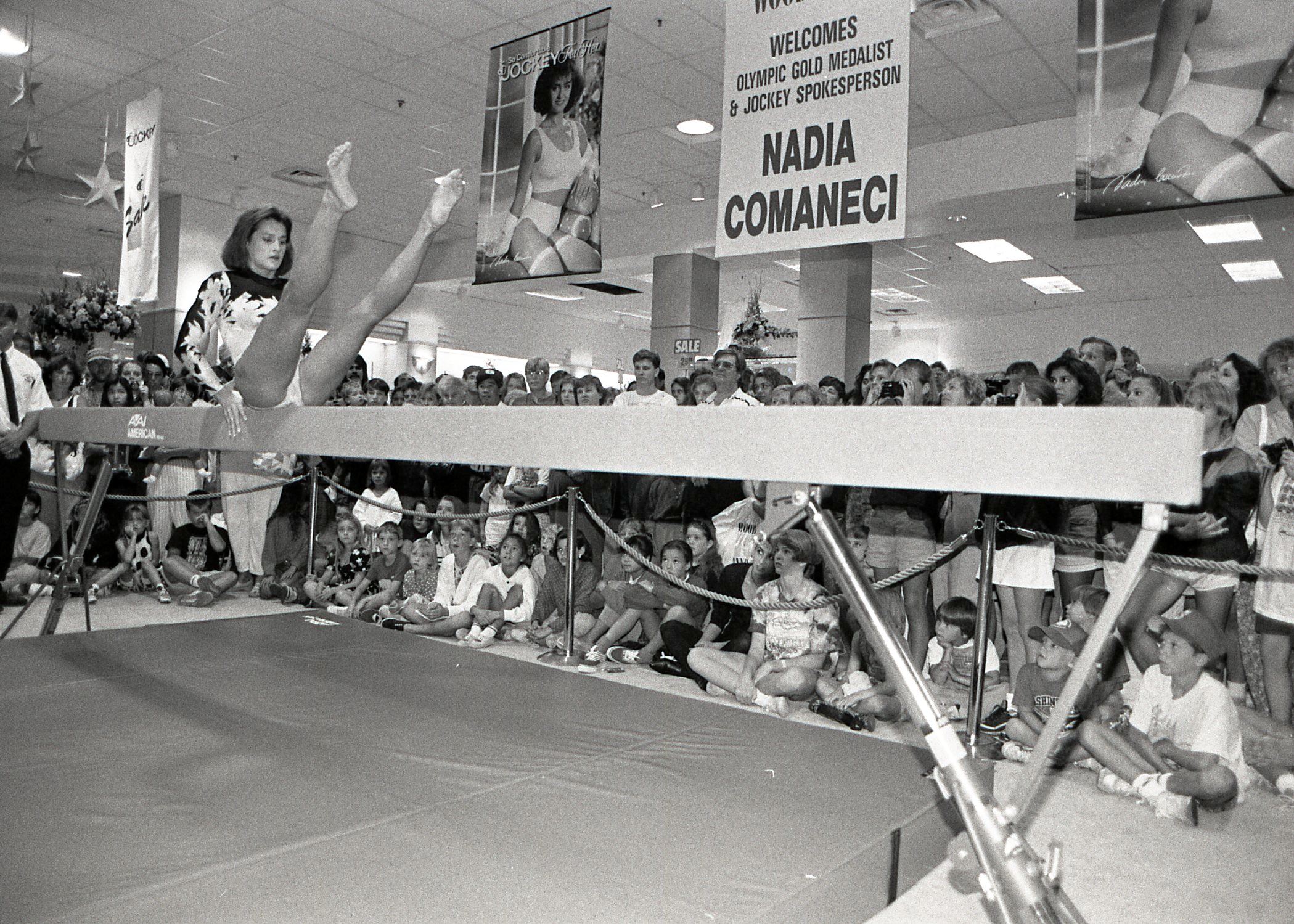 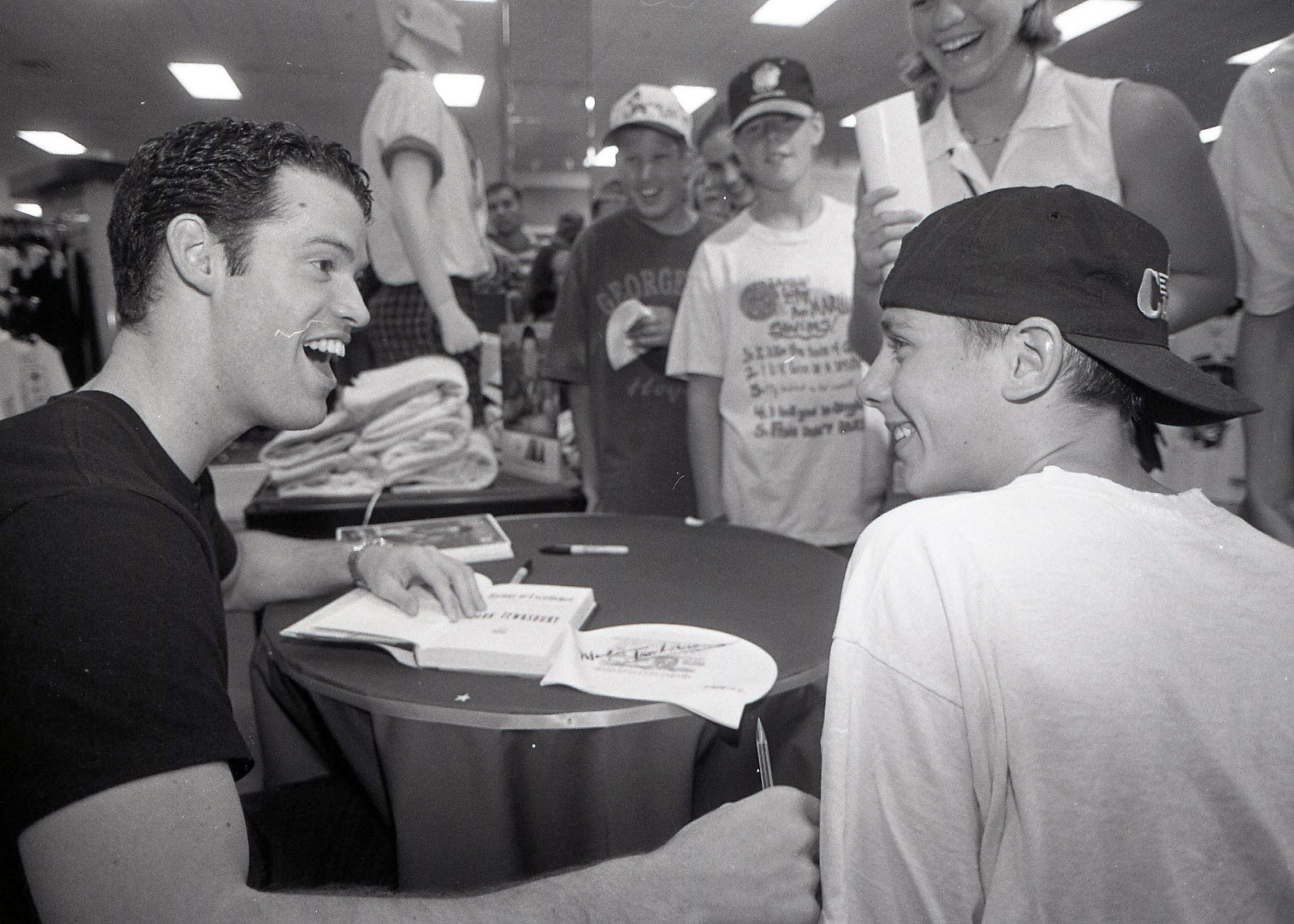 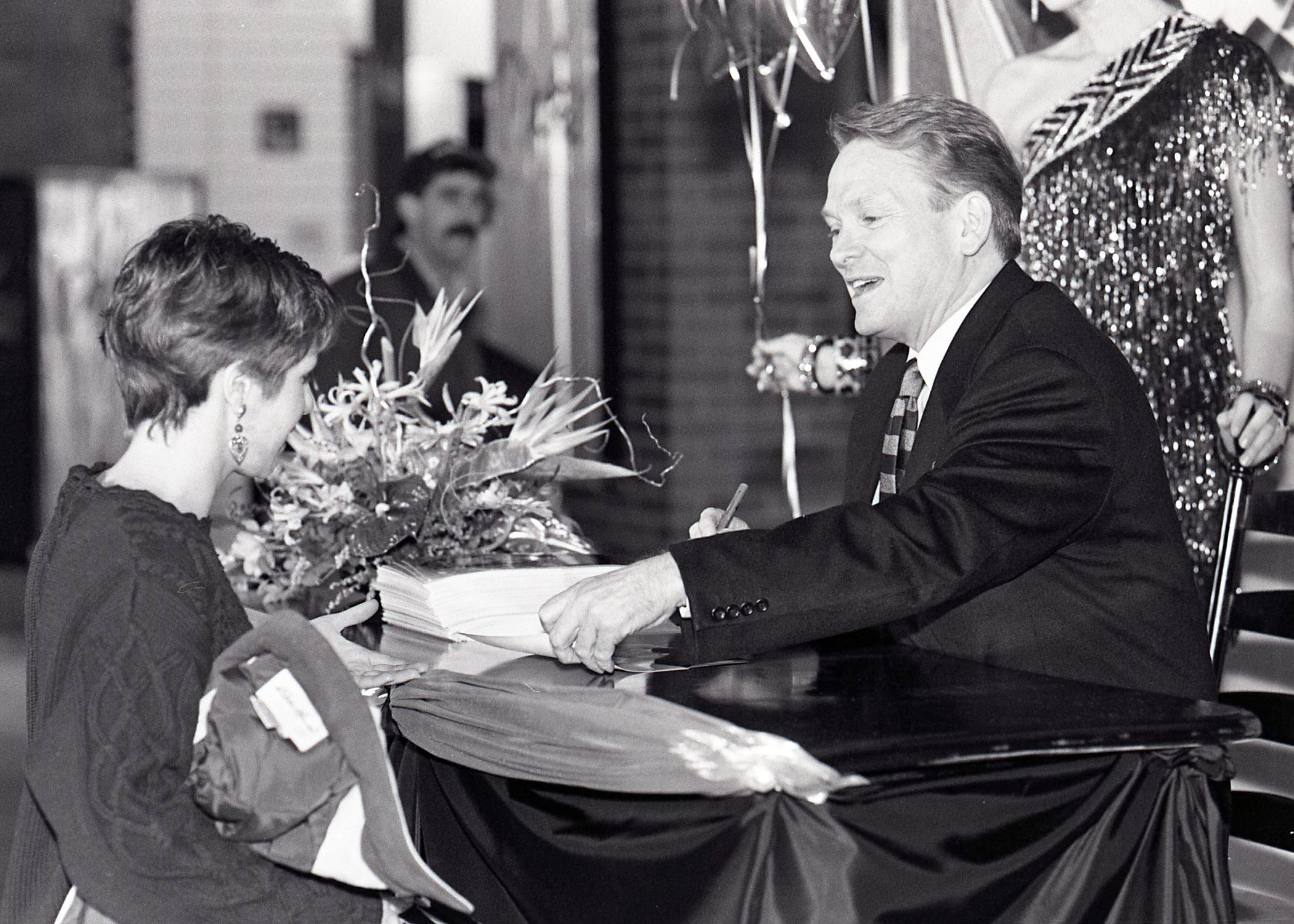 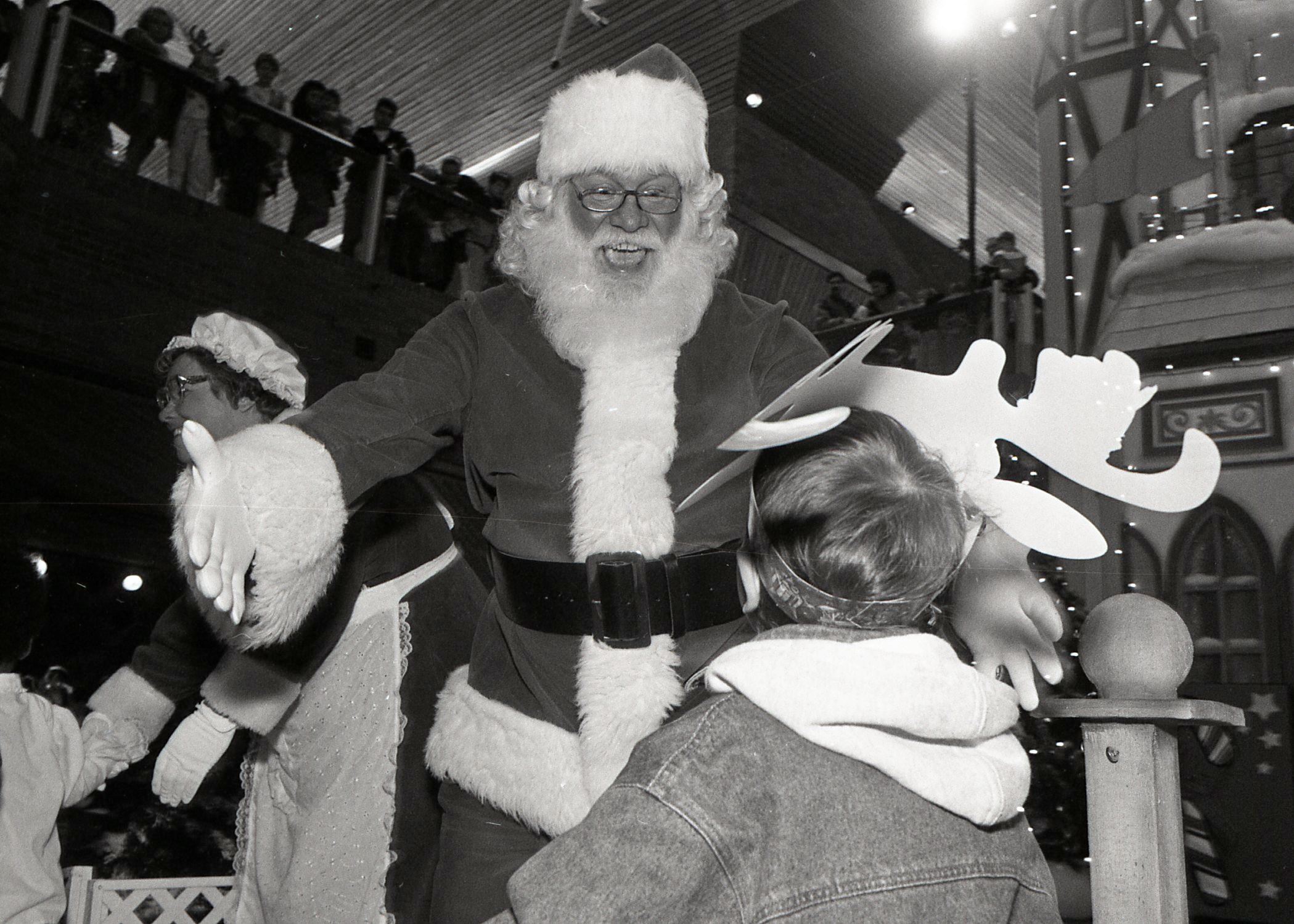 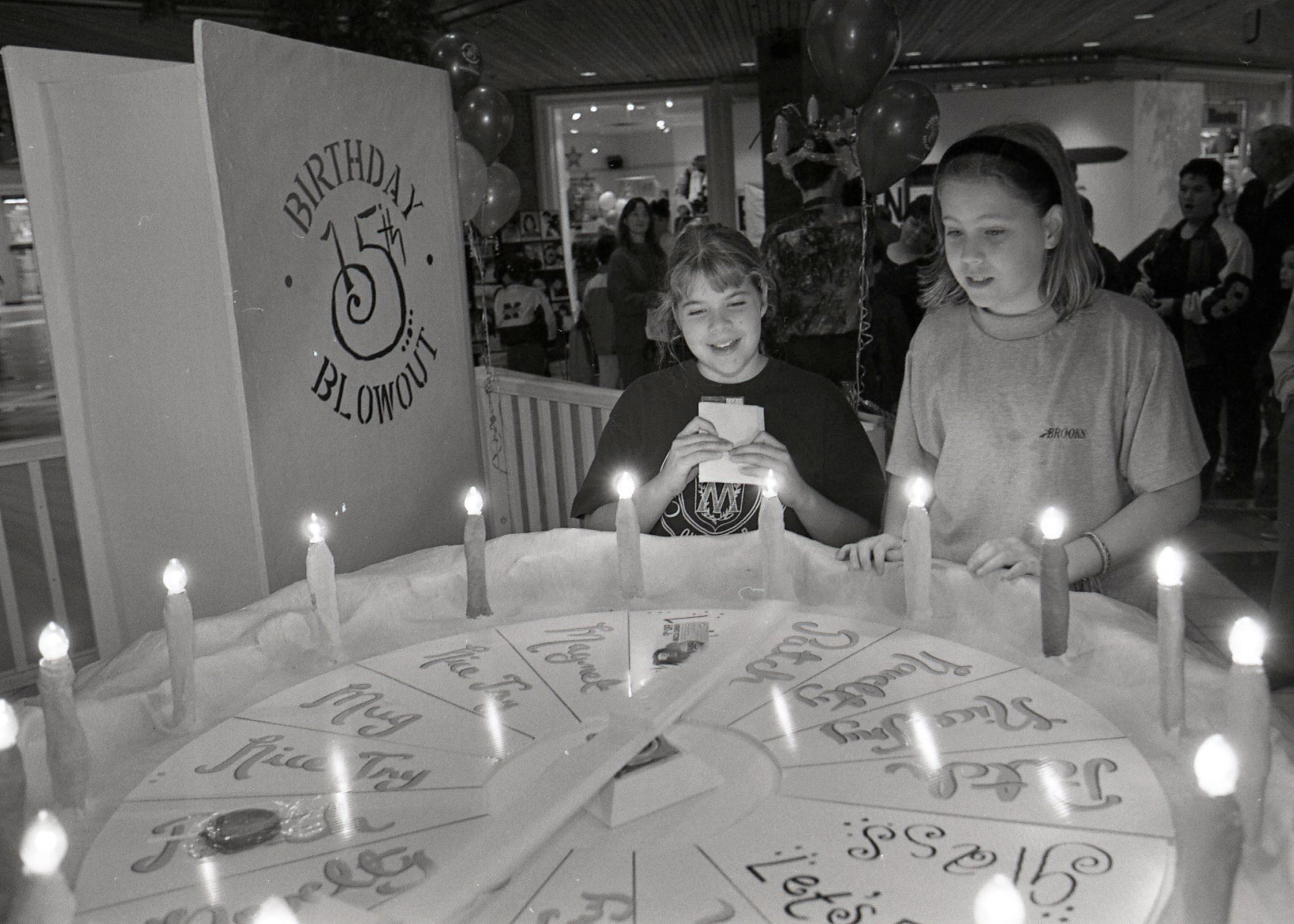 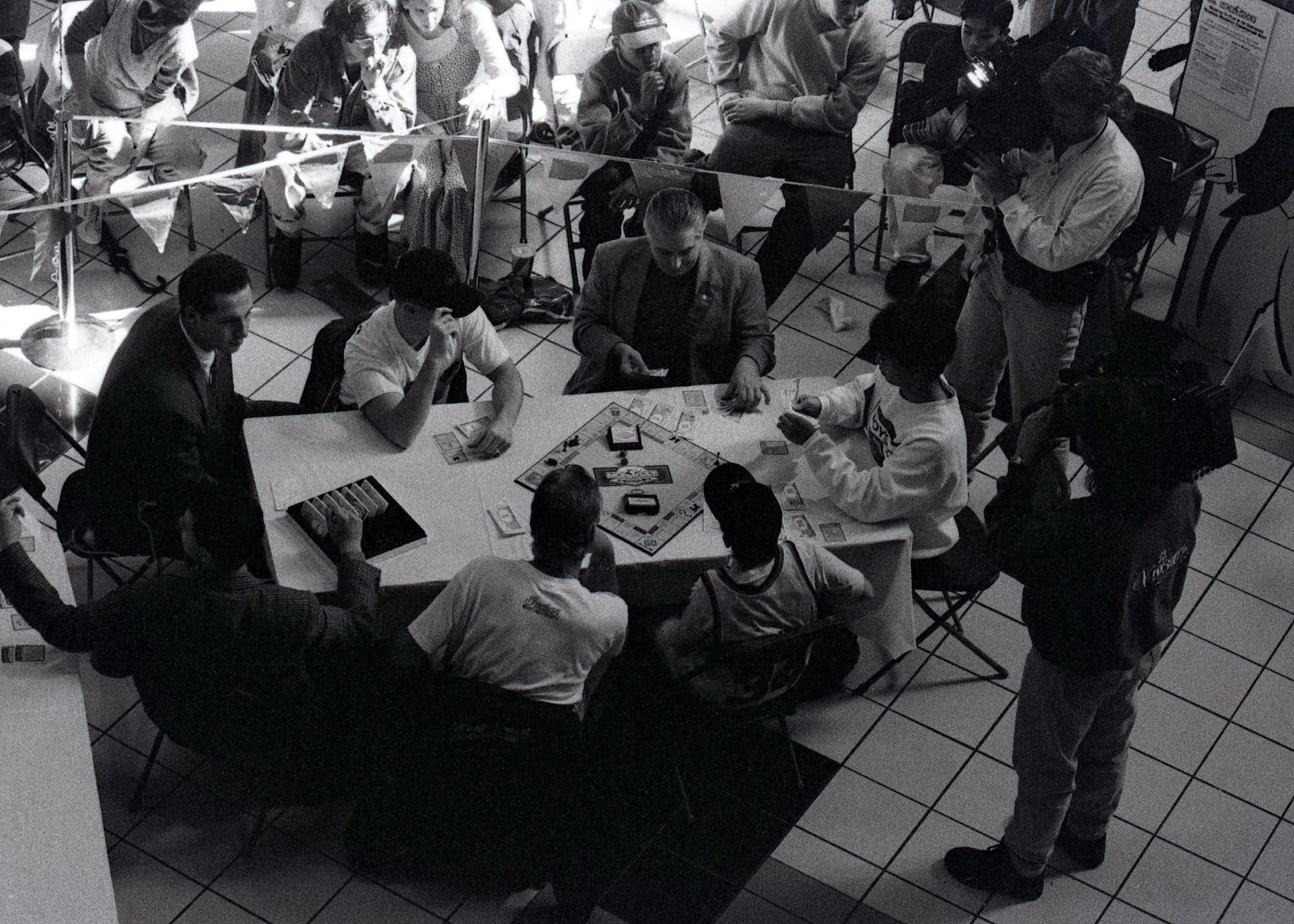